Water Galaxy takes an interesting and relatively simple (in terms of the gameplay mechanics) concept – using gravitational fields to send water from one planet to another – and turns it into a really fiendish puzzle game.  There is a plot to do with helping an alien race whose planets are running chronically short of water, and a representative of this race pops up occasionally to give you advice or to thank you for your efforts.

You have only two things to do – place the gravity wells, adjusting both their size and location, and choose an angle to shoot the water off your base planet from (on some levels you have a restricted angle, others let you go through 360°).  Each level has a limited number of gravity wells for you to use; usually you need every one you’re given to complete a level, though I did find one level where I found a way of doing it with just one of the 2 gravity wells.  You need to get 100% of the water transferred to the other planet to complete a level (though if you get 99% it will let you off the last percent!).

The music is good and the graphics, while pretty functional, have some nice effects.  There are quite a few different objects that can affect the water and gravity on each level, and you can clearly identify these on the game screen.  The different objects are slowly introduced over the course of the levels, and it’s done in a nice progression that keeps the game feeling fresh while not complicating things too much.  There are 52 levels in all, including a 7-level tutorial mode. 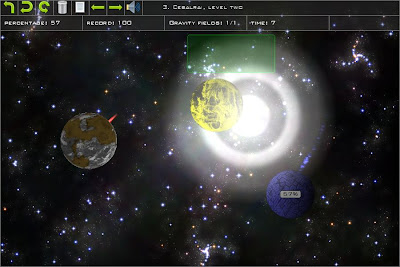 Water Galaxy plays very well, but it’s certainly no pushover.  Whilst it may be fairly obvious immediately on some levels what you need to do, it requires some very precise placing and sizing of the gravity wells to get things right, not to mention getting the angle you shoot the water out of correct too.  The best puzzles to me were those that involved the use of the gravity effect from moving objects.  It’s certainly a challenging game, and a pretty original concept.  I have to admit that there were one or two levels that I just couldn’t quite get right (try having a level where you can get 92% but not manage that last 7 or 8% to actually complete the level – frustrating!), but this is largely offset by the fact that you don’t have to play the levels in order or complete levels to unlock new ones, so you can just skip a level that’s really bugging you.  (At least, I think this is true apart from the very last galaxy.)

While 52 levels is pretty respectable anyway, Water Galaxy comes with a built-in level editor; levels can be easily shared for anyone to play once you’ve done them.  There are already a fair number of user-designed levels available via the “Online Levels” feature of the game.  This is a really good move by the developers, who have added a great deal of longevity to the game by doing this.  The level editor seems easy enough to use, though I haven’t really spent a great deal of time with it.  At least a few people have managed to create playable levels with it, at any rate. 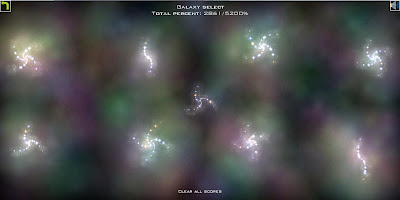 Overall, if you like puzzle games, you’re going to enjoy Water Galaxy (obviously if you don’t like puzzle games anyway, it’s probably not going to do much for you).  Without the level editor I would have had to query its long-term appeal, although for just $4 / £2.50 it would have been pretty good value for money anyway.  As it is, with extra levels being made, it could be outstanding for those who really like easy to play but difficult to master puzzle games (and Water Galaxy really is difficult to master!).