Calgary, Alberta, Canada - Rocket Splash Games Inc. today is pleased to announce the launch of Meme Kart, a new kart racer for the iPhone and iPod touch. This racer features eight of the most popular meme characters, re-imagined for a mobile generation. Complete with a nostalgic feel, this game is similar to the amazing kart racers of the 1990's. Join your favorite meme characters across 12 tracks, four Gran Prix's and battle it out on the track using special abilities. Meme Kart is available now on the iTunes App Store. 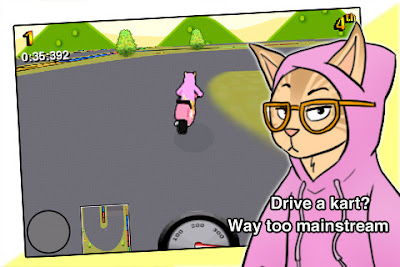 Battle it out to race ahead of your enemies using fireballs, oil spills, lightning and other abilities you pick up. Gameplay has been developed so the game is easy to pick up, but difficult to master. Three different difficulty settings are included to help all players succeed, yet create a challenge for themselves. Play through many different race modes, including Gran Prix, Mirror Mode Gran Prix, Time Trial Mode and Free Play Mode. Tracks offer an old-school feel, with raceways, ice tracks, dirt tracks and more:

* 8 Meme Characters: 8 of the top meme characters are included and rendered in 3D. Including specialized karts, like a scooter for Hipster Kitty and a Red Golf Kart for the Inglip Minion. Every character corresponds to their own acceleration, top speed, handling and weight classe.

* Gran Prix:
Four different Gran Prix's, and once you finish those there are Four Mirror Mode Prix's.

* Time Trial Mode and Free Play Included:
Compete your race times, or just race on the tracks solo with these two modes. 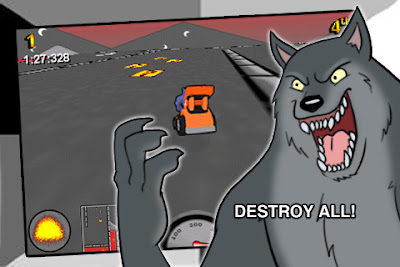 Pricing and Availability:
Meme Kart 1.0 is $0.99 and available worldwide exclusively through the App Store in the Games category.