Don't Run With a Plasma Sword by XperimentalZ Games is surprisingly sleek for an indie game.  There are comic book style cutscenes at the beginning and after boss battles. 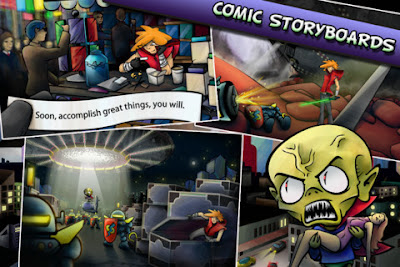 The game is fairly simple - you run forward across the screen in a side-scrolling style, you slide under some objects and jump over others, and in later levels jump to other platforms. You can also swing your plasma sword at enemies, most of whom take only one hit to remove. There is also an attack for stabbing down, thrusting forward, and swinging whilst sliding.

You have a number of damage boxes that go down when you are hit by an enemy or run into an object. Falling off the platform you are on is also a way to instantly fail the level.

The art is relatively good, the sprites are not very large and are therefore not too detailed but it works well with the aesthetic.

There are not many different power-ups, however they are rare enough for it to be a null issue. They are all quite powerful and affect the game differently. 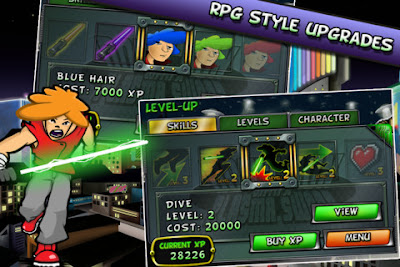 The music is an odd mix of catchy beats and old UFO film soundtracks in style, and it works very well with the theme, keeping players in the right mindset. The sounds are simple and short, and do not distract from play.

The game also has a nice sense of humor that people like me cam appreciate, for example in loading screens you will get a quote from a list of things not to do with a plasma sword, from the user manual of said weapon.

The boss battles are fairly simplistic, but are fun and tricky to beat on the first try.