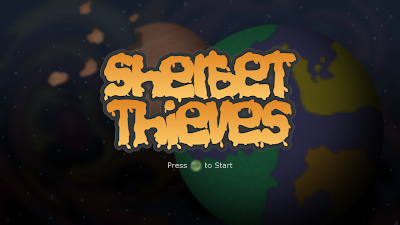 In the future, sherbet is grown in space (rather than going through the arcane process they go through now). Sherbet farms dots the starscape, but one farmer in particular is beset with sherbet thieves! Nasty aliens, weed-smoking hippies on magic carpets, villainous space cows with blasters (maybe they're jealous that Farmer Brown is now harvesting sherbet rather than raising space cows?) and pirates! All flying around trying to take the farmer's sherbet back to their spaceships. You've been hired to stop them. 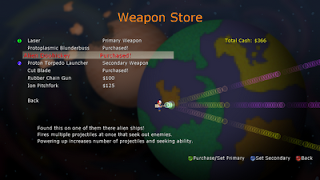 Sherbet Thieves is a twin-stick shooting game where you have two weapons, a primary and secondary one, with which to destroy the evil (or maybe just greedy) bad guys. Successful defense of the sherbet will win you money in which to buy more weapons, though you can only have two available at any one time. You fly around the screen through thirteen levels of increasing intensity, using the occasional gravity bomb (you have three) to draw the sherbet away from the spaceships before the aliens can take it to them.

The graphics are pretty good, if basic. Control is fluid as the screen fills with bad guys as well as yourself, as well as your shots and the shots that are coming at you during the huge melee (not to mention the smoke rings from the hippies that will really hurt if you run into them). The sound effects are also minimalist, with just your shooting and the pirate ships' missiles making any noise. The music does get repetitive at times, so you may find yourself muting it after a while.

Sherbet Thieves is an enjoyable, if very short, shoot 'em up game that will keep your fingers lively. The thirteen levels pass by quickly, though there are five difficulty levels that you can play through. All that does is increase the intensity of the waves, so unless you just want to challenge yourself, there's really no reward for completing them again on higher difficulty.

Still, the game is worth a look.

Sherbet Thieves on the Xbox Marketplace