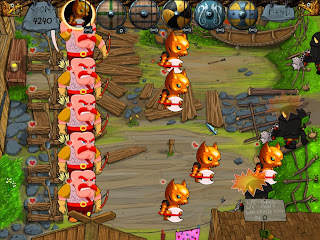 Orczz is a tower defence game by indie developers Legenda Studios.  You must proptect your kingdom from invading orczz, who are trying to steal your mead!  Rather than a top-down view with enemies pouring in from all sides, Orccz adopts a side-on view with 5 channels that need to be protected.  This might sounds quite limiting, but it doesn’t take many levels before things get quite challenging and often fairly hectic.  As well as positioning your units (which can consist of ranged or melee units, or tools [such as bombs]), you have a catapult as the last line of defence – but you must aim it correctly to achieve anything useful with it.  It seems easy at first (there are 3 difficulty levels – Casual, Normal and Hard – I played the game in Normal almost all of the time), but it doesn’t take long before you need a definite strategy, and an effective application of that strategy, to progress. 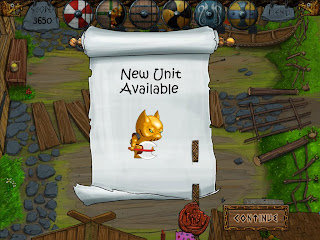 The gameplay is simple and intuitive, and allows for quite a nice range of playing styles.  There are fun mini-games every few levels, which serve as a pleasing distraction and give you a chance to gain some more cash, which can then be spent in the game.  At the start of each level you buy your units – in the game they don’t cost anything further, although tools cost you on the battlefield as well.  When an enemy is zapped, a coin drifts up the screen – you have to catch it quickly before it disappears, thus earning more cash to use in the next level.  There are lots of levels to play through, and the whole thing is backed up by a simple but engaging fantasy story, with a fairly heavy dollop of humour. 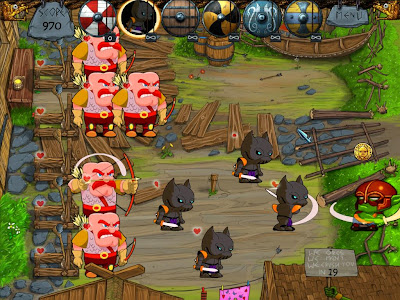 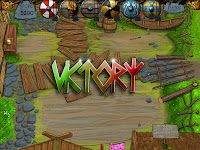 The graphics are nice and cartoony, with functional animation (though that suits the game nicely), all rather reminiscent of the style of Albert Uderzo (Asterix).  The music is very good too, and there are some funny sound effects.  New units are added to your supply chain frequently, and after a short time it becomes quite a decision working out which you should pick (you can have a total of 6 types in each level).  I did think there’d be a more marked difference in the speed more or less powerful units became available to you, but otherwise it all feels very intuitive, though obviously a fair degree of trial and error is also involved.

All in all Orczz is a very accomplished tower defence games, and it offers something to those who are more oriented towards arcade games too.  It doesn’t take itself too seriously, and is all the more enjoyable for it.  Orczz is available for PC and Mac for a price of $11.99 (£8.08, 9.23 euros).  (PC Version reviewed here)