Invidia422AC by Kiril Arshinkoff is the game “with all religions” in it, although strictly speaking it has a fair number of religions in it, and they only have a marginal influence on the game itself.  It’s a very simplified Civilisation style game played out on a 10 by 10 grid; you have 4 tiers of building, only the first being available to begin with; you build houses to gain income, farms for food, wells for water etc, and as more sophisticated buildings come along, they might give you one resource / commodity but take away a different one.  With certain buildings you get a “quest”, which is basically a yes/no question which affects how things map out.

Basically Invidia422AC is a number-crunching game – you have to keep an eye on all your resources to make sure none run out, while building your empire and fame, eventually winning the game when you fill the fame bar.  A game over situation can happen very suddenly and, sometimes, for no apparent reason (though maybe not having an army wasn’t helping me when a dragon suddenly turned up...).  The game desperately needs a tutorial mode, but the game manual, albeit featuring strangely low resolution images, gives you enough information to play and win the game. 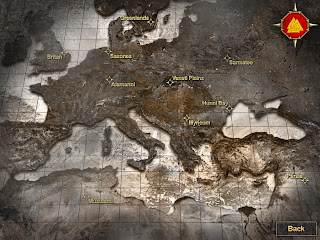 The biggest problem really is pacing – especially near the beginning, to get enough money to actually build something, you have to wait ages.  I tended to find myself setting up a small self-sustaining village, leaving the game to run while I did something else, and coming back to it later.  Once you have made 100 buildings and everything’s going okay, you really have to simply wait for your fame bar to slowly fill up and can’t influence the game in any other way.  The “quests” are simply yes or no answers to a particularly question; usually either answer is beneficial in some way.  Your choice of location didn’t have much effect that I could discern (although maybe the dragon doesn’t appear in every location?), and choice of religion at the start of the game simply made different buildings available / unavailable.

The graphics are nice enough, very clear though they could do with alt tab descriptions.  The music is nice for about ten seconds, then it gets repetitive, and after a couple of minutes becomes very annoying.

When you win the game, you are presented with a secret – the first one I found seemed to be more of a rant than anything, but at least made the sensible point that it would be nice if people stopped using their differences as an excuse to kill each other.  The game’s author isn’t afraid to put forward his views in a rather forthright way, including the game manual talking about his thoughts on piracy and related subjects, which he says got him thrown off a particular forum.  While I don’t entirely agree with all of his points, as Voltaire would say, I defend his right to have them.  I’m not sure if all of the “secrets” are quotes or not.  One of the purposes of this game is to make people a bit more interested in religion, history and politics, and to a certain extent it does this.

Anyway, overall I felt that Invidia422AC is a game idea that has a lot of potential (and certainly a Civilisation style game that doesn't take weeks to play a single game is a nice concept in itself), but it needs more work to be a really enjoyable game.  It lacks polish and features – for instance no save game (which I felt would be a good feature despite the relative shortness of the game), and when your game ends it just throws you straight back to Windows rather than a title screen.  Also it felt as though the religion, location and the ethical decisions made throughout the game had very little real consequence.  If more player involvement in the game could be made, the pace sped up a little at the start and more to do near the end, Invidia422AC could be very good.  Though you had various locations, there was no difference in the appearance or size of the map.  There didn’t appear to be any strategy involved in where you actually placed the buildings.  Being able to see the pros and cons of each building in the game itself would be nice rather than having to check in the manual all the time.  Of course music that didn’t drive you mad after a few minutes would definitely be a boon!  Random events are great, but not if they instantly end your game.

A few relatively small changes could mean a big improvement for this game.   I’ll let you know if it’s updated anytime.