Descend - An Old-School RPG In The Palm Of Your Hand

Sydney, Australia - Independent game developer Steve Jarman today is pleased to announce the release and immediate availability of Descend RPG to the App Store. Descend is an old-school, first-person, grid-based RPG inspired by the classics of yesteryear.

If games like "Dungeon Master" and "Eye Of The Beholder" had you glued to your computer a couple of decades ago, then Descend might be the little piece of nostalgia that you've been looking for on the App Store. The game recreates the first-person, grid-based movement of those classic games, while placing the player in a modern, fully 3D environment.

Designed with the mobile platform in mind, Descend is easy to pick up for a few minutes at a time, or for a few hours, making it an RPG that travels easily. The game does all of its saving automatically, allowing players to continue from where they left off whenever they're ready for more.

With over a dozen expansive dungeon levels, lovingly hand-crafted by the developer, Descend takes place in a richly furnished world which looks stunning on the iPhone's tiny screen, and touch input breathes new life into the classic six-button movement controls. With an interesting and captivating plot, Descend will have players unravelling a mystery that threatens the very survival of their people. 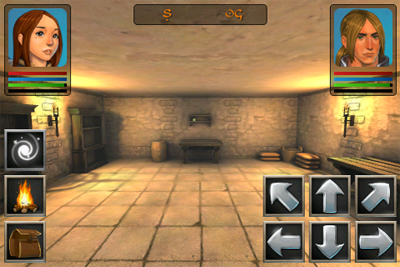 Pricing and Availability:
Descend RPG 1.0 is only $3.99 USD (or equivalent amount in other currencies) and available worldwide exclusively through the App Store in the Games category.


Developing applications for the past 15 years on numerous platforms, Steve Jarman is an indie game developer based in Sydney, Australia.