Leeds, United Kingdom - Krazysoft today is pleased to introduce Ball Skills 1.0 for iOS, their new Football (Soccer) Game that challenges the player to develop professional ball handling skills. This is not a football game with goals and teams. Instead, the game focuses on a single aspect of football: the player must develop their ability to control the ball and keep it aloft by tapping beneath it. As players progress through six Stages, each with eight Levels, new hazards and bonuses are introduced. Featuring realistic game physics, Ball Skills is an extremely challenging and engaging test of concentration, dexterity, and ball control.

Professional football players can be seen warming up on the sidelines, balancing a ball on their foot, keeping it aloft with small taps, kicking it higher and higher and preventing it from touching the ground. This is the goal of Ball Skills. Players must learn how to control a hard, inflated sphere, a shape that is inherently unpredictable when hit. Slowly, a player discovers how to replicate with their finger what pro players achieve with their feet and knees. The game physics are very realistic, allowing players to control the spin, height, direction, and acceleration of the ball.

In Play mode, gamers unlock six Stages of eight Levels each and receive one, two, or three stars for their performance at each Level. As they progress, players are introduced to TNT (deducts points and sends the ball flying), the Vortex (sucks up the ball, ending the turn), the Life Saver (prevents the ball from hitting the ground), Kick Power (allows the player to select the kick power), Hooligan or Bad Guy (an obstacle in the game that is designed to hinder progress that can be defeated by beating them with the ball), and the Accelerometer engage (tilting the device alters the in-game gravity so the player can control the direction of the ball). 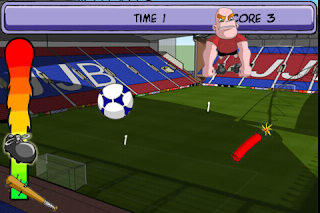 In Practice Mode the player can practice at his or her favorite football stadium using all of the features that have been unlocked in Play mode. Each of the 19 Stadiums available represent all the top UK football team home grounds, including: Old Trafford, Stamford Bridge, Anfield, Emirates Stadium, and many more. Ball Skills is a fast-paced, skill-based football game that will provide hours of fun.

In both Practice and Play mode the players can challenge friends to beat high scores via Game Center.

Pricing and Availability:
Ball Skills 1.0 is only $0.99 (USD) and available worldwide exclusively through the App Store in the Games category.

Based in Leeds, United Kingdom, Krazysoft was founded in 2010 by James Hutchinson. He works as a small, independent game designer and developer, with a full-time position as an IT professional.
*visit the iTunes, App Store and Mac App Store*
Labels: ipad, iphone, ipod touch, new release, sports