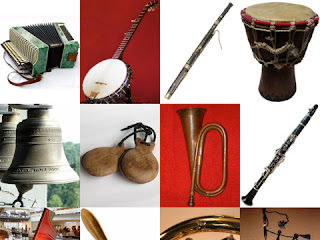 Blainville, Quebec/Canada - Independent developer Mathieu Brassard today is pleased to announce the release of Discover Musical Instruments for iPhone, iPad and iPod touch. The third App in a series of four, Discover Musical Instruments is especially designed for babies and preschoolers and provides them with rich visual and auditory content that teaches about musical instruments.

Easy to use and intuitive, this App captivates kids by presenting them with 60 high-quality pictures of musical instruments. When children touch one of the pictures in landscape mode, they will hear the sound of that musical instrument. The App includes a good variety of wind, strings and percussion instruments.

Portrait shows the picture and name of the musical instrument. Touching the picture will reveal the sound the instrument makes, and touching the name will pronounce it. A personalization module allows users to change instrument names and record custom sounds and pronunciation. All customized data can then be easily backed up and restored with Dropbox.

Other Apps in this series, Explore the Animal Kingdom, EducaVroom and EducaFood, are also aimed at children between the ages of 0 to 6 years, and they are available through the App Store. All Apps of this series include words in both English and French. Spanish will be gradualy added to other Apps.

Pricing and Availability:
Discover Musical Instruments version 1.4 is $1.99 USD (or equivalent in other currencies) and is available worldwide on the App Store.


(Note - these are not MY kids, as in CaptainD's children, but the developers.  Just in case anyone got confused...)

Located in Blainville, Quebec/Canada, Mathieu Brassard is an independent developer of iOS Apps. Father of 4 children between the ages of 2 to 6 years, Mathieu Brassard has the concern of delivering quality educational games.