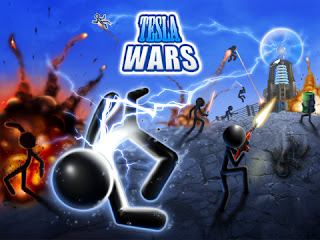 Odessa, Ukraine - Synaptic Wave is glad to announce that an updated version of Tesla Wars was recently released. It should be noted that according to the tradition, the updated version is free for a limited time.

Tesla Wars is a game in a very popular genre "tower defense". Player will have to resist the onslaught of a huge number of enemies armed with almost all types of weapons - from guns to missiles. But he will get help of unique and powerful Specials, such as freeze or earthquake.

In version 2.5.0 player will meet with 4 new kinds of enemies.

Grasshopper uses a very lightweight propeller helicopter with the pedal motor. It's armed with powerful missiles that's why, in order to reduce the weight, it isn't armored.

In contrast Steel Hornet is a perfectly armored helicopter. This unmanned helicopter can use both guns and missiles in full automatic mode therefore it's one of the most dangerous enemies.

Scorpion is the first kind of enemy on SUV. The characteristics of his Hummer allow him to shoot only when he stops.

And the last new enemy - Mad Mantis - is really dreadful commando who armed submachine guns with very high rate of fire. By the way he is genetically insusceptible to fear.

"Player does not know how to fight against new enemies," says the leading developer Pavel Tarabrin. - "Therefore, it makes gameplay even more exciting and more interesting".

Pricing and Availability:
Tesla Wars 2.5.0 for iPhone/iPod and Tesla Wars HD for iPad is now free and available worldwide through the App Store in the Games category.

Synaptic Wave is an independent development company founded in 2009. With a focus on entertainment, Synaptic Wave creates various gaming and business apps for the Mac and iOS platforms.