With their first release, “Best In Show” due for release imminently, I thought it would be a good time to interview Mike Gnade of Graduate Games. 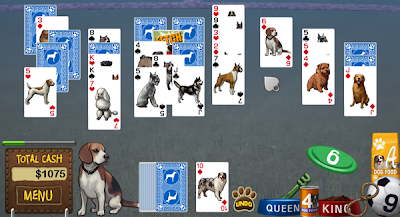 1/ How did Graduate Games originate?

During Grad School, I realized that my passion wasn’t for economics.  I discovered Game Tunnel that year (2005-2006) – an indie game review site – and was excited to learn that there were indie game developers out there making their own games.  Once I graduated, I got a job and moved back to Delaware.  I couldn’t let the indie game thing go though… so I contacted one of my oldest friends, Zak Gebelein, and we started brainstorming.  We came up with tons of grand game ideas.  We started some and they never reached the quality that we wanted.  We switched to developing more casual games for the whole family and actually started finishing games.

Best in Show is our 3rd game.  It’s a casual solitaire game with some RPG elements and yes, there are quite a few dogs in it.  Zak and I are both dog/animal lovers.  Zak has 2 dogs and I have a dog and a cat.   Both of our dogs are in the game as well which is really cool. We settled on a dog theme for our solitaire game after looking at some of the casual game portals and realising that everything was ghost story mysteries and there weren’t a lot of pet-focused games.

3/ How long has it taken from the game to get from initial concept to completed product (or end-stage beta version if you haven't completed it when you do this interview)?

We will definitely finish the game this month (Sept 2011).  The game actually started back in November 2009 as a mobile game/prototype for Blackberry.  After about 8 hours or work, we had the basic mechanics of the game working, but we tabled the mobile idea for about 3 months.  In February 2010, we came up with the dog theme and started really committing to the idea.  We moved it to PC for better performance and later announced it in April 2010.  All in all, it looks to be about 20-24 months from initial concept to full release.  Zak and I have always worked on the game in our spare time.  This past year, I have been lucky enough to have a flexible work schedule and have been able to commit more time to it.  We’ve never worked on the game 40 hours per week though.

4/ What game genres have you combined in Best In Show?

Best in Show is a card game that simplifies the rules of traditional solitaire.  The objective is to clear the field of play by clicking cards that are 1 number higher/lower than the current discarded card – the suit does not matter.  We have also added a cute adventure story and some RPG elements when it comes to dog training and selection.

5/ What have you used to develop Best In Show?

Best in Show was developed using Clickteam’s Multimedia Fusion 2 Developer Software.  For art/animation, we did everything in Photoshop.

6/ Any particular challenges that have come up along the way?

The biggest coding challenge was to get the damn UNDO button to work the way we wanted it to, but we eventually got there.  Scheduling time to work on the game was challenging at the beginning and we were really bad at setting milestones and committing to a time schedule.  We’ve become better now that we can see the light at the end of the tunnel.

7/ When you look at your game, what elements of it are you proudest of?

I absolutely love the art direction and look of the dogs in the game.  They look great, but I am proudest of the RPG elements and meta-game stuff outside of the solitaire game.  Collecting and training dogs isn’t just about getting some achievement (though we have those)… there’s actually a real gameplay incentive to work on it.  Each dog has 2 different abilities that definitely help you perform better in the game.  Every dog has a unique combination of these abilities, so unlocking and training dogs is all about finding the dog that fits your play style the best.

8/ What are Graduate Games' future plans?

After we finish up Best in Show, we will work on the Mac/Linux ports of the game and then likely look at doing an iPad/iPhone version of the game.  Depending on how Best in Show does, we would love to do a sequel and add more dogs, dog abilities, mini-games, and other features.

9/ What is the best advice you could give to aspiring indie developers?

The biggest piece of advice I could give would be to start making games and start small!  A new developer will learn a lot when they first start making games and there’s nothing worse than spending hours and hours on a game that has no market or was just poorly designed from the start.  I wish I had started small and made a bunch of free flash games first.  Flash games get played and there’s instant feedback on many of the flash game sites with their reviewing systems.  If I had gone down that route, I could have prototyped a bunch of ideas and refined my skills before going for a full downloadable game release.  I regret working in a vacuum for years and wish I had gone out looking for a mentor and criticism earlier.