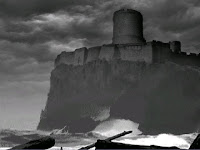 Enter the Story is a hugely ambitious project to create an adventure game made up for many adventure games, each based closely on a classic work of literature.  The Count of Monte Cristo is the fourth game in the series, and the last to be made with AGS.  Based on Alexandre Dumas’ famous novel, it puts the player in the role of Edmond Dantes, who is wrongfully imprisoned on a remote island and has lost everything.  Eventually he will have the opportunity to exact revenge on all those who have wronged him, but your immediate concern is how to escape...

The graphics are immediately eye-catching, a combination of watercolour paintings and sketches.  It won’t be to everyone’s tastes I guess, but I found that the unique visual style that works rather well in the game.  The animations are okay, sometimes good, although in one early scene Edmond appeared to be swimming quickly through a wave coming the other way that looked like it should be capable of sinking a battleship!  (That’s the only animation that struck me as wrong btw, it’s just that it stuck in my mind.)  Some of the backgrounds are quite beautiful.  The soundtrack is made up of a number of classical music scores, and again it works very well (though once again perhaps it won’t be to everyone’s taste!).  There is no voice pack available. 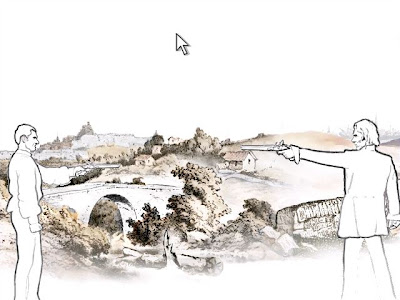 The interface is simple; there’s no inventory, you just click on items on the screen.  It’s not quite in the style of Machinarium or Hamlet, but something very much along those lines.  Even when you can’t actually get to a location you can often visit it in thought – interacting with objects then makes Edmond think about them.  This is an interesting idea but I found its implementation a little annoying – especially in the introductory section of the game where you had to think about things and people to work out who framed you.  Partly because of this it took me quite a while to actually get into this game, but after a while you get used to the way it expects you to do things, and the storyline really hooks you.

Though it’s not a difficult game apart from sometimes a certain amount of aimless talking to people trying to find the right one, usually the game guides you towards your next target and there’s an in-game help function anyway.  Sometimes it seemed too easy, merely requiring a couple of mouse clicks to progress the story, though there are a few decent puzzles here.  The game struck me as a cross between an adventure game and interactive fiction – I’m not entirely sure fans of either genre will be completely happy with the result, but it’s a bold experiment in game design.

Being based closely on the book, The Count of Monte Cristo has a compelling story and the way the plot is worked into the game is quite cleverly.  The dialogues occasionally didn’t quite make sense to me and there was a smattering of typos, but overall the conversations were reasonably believable.  The game is a little buggy, but mostly pretty inconsequential bugs and no show-stoppers.  There was a bit of pixel-hunting, but not enough to get really annoying.  One puzzle (involving sending a semaphore message) was at the same time quite clever and pretty annoying – though I may have missed something about how the letters are actually formed, which is what caused the annoyance.  (Eventually with a couple of letters refusing to be found, I turned to Google for aid!)   One more slight annoyance was the presence of locations in the game that you can’t visit – but you have to wait for your character to walk to it before a message comes up telling you it’s actually a location from a different game (book). 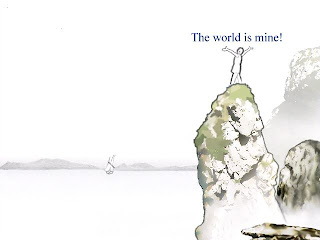 There’s a lot of attention to detail in The Count of Monte Cristo, exhibited in some of the things that happen in the game, and some that you may never find or use as they’re not needed to complete the game.  For instance if you look in the right places, you can find game design notes (and comments about the game author’s mental instability!).  Also, the entire book The Count of Monte Cristo can be read in the game itself (though I’d struggle to think of someone who’d actually be likely to do that).

To be honest The Count of Monte Cristo is a very difficult game to give a clear recommendation for or against.  There are a lot of things that it does really well; other things it struggles with.  If you’re looking for an adventure game in the traditional sense you’ll almost definitely be disappointed; personally I did enjoy it, but in a rather abstract way.  If you’re a lover of literature and willing to play something that dares to do things a bit differently, sometimes succeeding but sometimes failing, than it’s very possible that you’ll enjoy it – as long as you can stick with it long enough for the storyline to start getting really interesting.