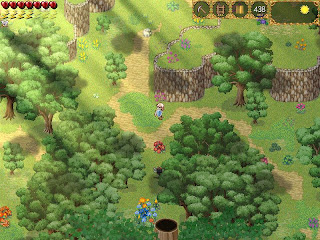 Fall of Gods is an indie arcade RPG by developers Geex. It puts you in the role of a young lad who has to save the world, as young lads so often do, and finds himself in the middle of a prophecy (as so frequently happens). You go around with creatures to battle, quests to fulfil, puzzles to solve and characters to talk to.

Fall of Gods looks nice, with well-designed maps that don’t don’t give the appearance of being made with tilesets. The animation is simple but effective, and there is lots of variety, life and movement in the game world, and sparing use of visual effects. The music’s pretty good too, and while sound effects are somewhat minimalist, they’re well used.

Quite a few of the normal RPG mechanics are simplified in this game, but that fits in nicely with the blend of arcade and RPG. In particular you don’t gain experience from battles, just possibly a coin or item (more significant items for the bosses, of course); since the monsters regenerate whenever you re-enter an area, this means you can ignore them without feeling you’re losing out on levelling up. (Very rarely you can find a Level Up in a special location, which adds one to your hearts (life) and Egria (mana). Similarly there is very little in the way of different weapons / armour etc, but the few items implemented into the game seem more important as a result. The collision detection in the game seemed a little unpredictable, but if anything it errs in favour of the player, so it’s not a big problem.

The storyline is okay and unashamedly generic, while the dialogues lack sparkle (and sometimes contain typos), they sometimes have a wry humour behind them. The game plays really well and the interface is good, although I did sometimes find myself forgetting which key did what (quickly remedied by looking at Keys from the menu though). Despite your health being prominently displayed at the top of the screen, I found it very easy to lose track of this while in the middle of questing and exploring new areas – so I’d advise saving OFTEN! The game features a map what updates important locations and quests as you go, which is a brilliant feature. On the other hand I would have liked a quest log in addition to this, as I sometimes found myself wondering what I was supposed to be doing for who and why. As with most RPGs. you

One thing the game does really well is drip-feed new locations to you. After a while of wondering around the same locations and thinking that there really wasn’t anything new I could do, I realised that certain spells could open up new areas – using the Explosion spell to blast through a weak are of cave wall, for example. The way this works is actually quite intuitive once you get used to how the game works. Coupled with this there are several rather clever puzzles in the game, some of which take quite a bit of working out. The game has day and night, which also affects when you are able to perform some actions / access certain places.

One thing I would like to see in an update (one with bug fixes has already come out, another with mouse control is due soon) is the ability to buy more than one item at a time. The shops have very few items but for some of them, you would probably want to buy more than just one (if you want to buy them at all). Not a major grumble, but something that could be improved upon. 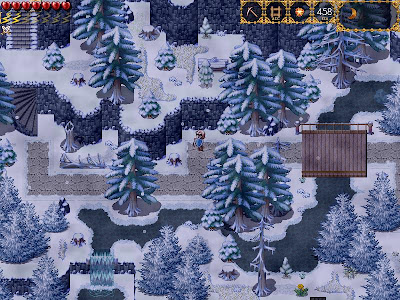 Overall Fall of Gods is a high-quality arcade RPG. I did feel that one or two aspects of the game had perhaps been a little over-simplified, but the gameplay is well balanced between arcade, RPG and pure exploration; usually you can find something new with a little perseverance or lateral thinking. There are some clever puzzles in the game, the map with quests marked on it is a brilliant idea (even though I’d still like a quest log, perhaps that’s just my bad memory!), and the game has a difficulty level that provides a challenge while not making it unreasonably difficult to progress. The aesthetics are nice and the storyline, while not earth-shattering, is good enough to keep the plot moving along nicely.

It’s not a game for RPG purists perhaps, but if you yearn for a little Zelda-esque action, Fall of Gods is the perfect choice.

Find out more and get the game / demo from the Official Website.  (There is also a free game manual that you can download from the website.)
My review is of the PC version of the game, though Fall of Gods is also available for Xbox (and as far as I know, exactly the same apart from the controls).