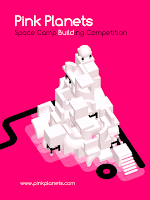 MeinMein is an independent game development studio based in Utrecht, the Netherlands, consisting of Meindert Kamphuis (doing game design and graphics) and his brother Gerbrand Kamphuis (doing the programming).

Currently MeinMein is close to finishing its first game ‘Pink Planets’. Pink Planets is a cute isometric grid-based sandbox puzzle game set in a pink universe. As a little hamster*, alone in space in an oversized space suit, you have to rescue your friends from surprising monsters by building cute and creative structures. And if you gather enough building blocks, you even get to build your own level, which you can easily share with your friends!

The game features a variety of interesting sandbox levels and is scheduled to be released for PC later this year.  Pink Planets' audio is designed by Kozilek, who is known for the mesmerising tune he made for Vlambeer's game Luftrauser.

Prior to the game's release there will be an online Building Competition Game which will launch on 30 September. By unlocking building blocks in puzzle levels, players will be able to build their own structures, which can be uploaded and voted for on the competition website. The creators of the three winning structures will get a free copy of the game. But the best part of the competition is that the winning structure will appear in the final game! 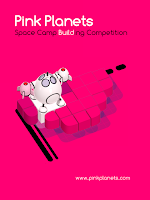 “In Pink Planets not everything you encounter is immediately explained. I do this on purpose,” says Meindert Kamphuis, owner of MeinMein and developer of the game. “When I played computer games as a small boy, I often attributed deeper meaning to the small animations in games, which in reality were but mere decorations. In Pink Planets I want to give players the same room for their imagination. And I hope we can give a taste of that in the Building Competition Game.”

* actually, we are not 100% sure Simon is a hamster but we think it is rude to ask.
Labels: announcements, competitions, pc