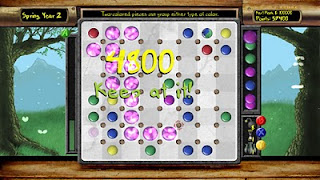 Perplaxis, a Xbox independent game put out by Walk'N'Squalk Productions, is a cute puzzle game where the object is to match pieces together by colour in groups of six in order to make them explode. More pieces keep appearing on the map at a faster and faster pace as the game goes on, and you must keep the board from filling up. If it does, you lose the game.

The player rotates the pieces around the gears that are on the board, requiring quick fingers to move pieces where you want them to be for maximum points (and to get rid of as many as possible in one shot). Players are aided in this quest by special power-ups that are earned randomly through exploding the pieces. Such power-ups include bombs that will explode all the pieces around a gear, an airstrike that randomly drop eight bombs around the board, and the ability to stop time for ten seconds (meaning no pieces will appear). The more pieces you match past the initial six, the more points you get, and you can also hit the "A" button for a ten second period where pieces will not explode. This lets the player line up pieces for maximum point-gain. This, as with the other power-ups, is limited, though.

The graphics in Perplaxis are cute and simple, which is all a puzzle game like this requires. The mechanics are basic, rotating the pieces left or right with either the bumpers are triggers (whichever you feel more comfortable with) and each power-up having its own button. It's very easy to move the wrong pieces as the speed of the game intensifies, which isn't always helped by the jerkiness with which the cursor moves from gear to gear at times.

Perplaxis allows two players to play split-screen, but that's the only multi-player option.

Sadly, there just isn't a lot to the game, and it lacks the addictiveness of other matching games like Bejeweled. While the initial playthrough is fun, and I played a second game just to see whether I could beat my score, it just doesn't hold the interest over the long haul.