The World’s Most Dangerous Virtual City

Your heart stops as you hear a sickening boom outside. Your ears ringing, you look wearily through the shattered glass to see smoke billowing high into the sky less than two blocks away. An emergency broadcast breaks over the radio advising all residents to stay indoors. Your cell beeps, the SMS reads - WE ARE AT WAR! Frantically stuffing your gas-mask and Beretta into a bag, you head into downtown TORN City to help your faction members.

TORN City - The world’s largest text-based MMORPG is back with a vengeance and plans to over-take Mafia Wars in the race for #1 online crime
game.

Established in 2004 TORN City has matured in epic proportions from a teenage boy’s bedroom project to a monster million dollar business.

The game is not for the faint-hearted and is darker and deeper than a Chilean miner’s flashlight, which is what sets TORN City apart from the competition.

Just like real-life, you can commit most crimes in TORN City, from shop-lifting and pickpocketing to arms trafficking and kidnapping.

Don’t worry; it’s not all about crime. Like any real city you can meet others, get married, get educated, get a job or run a company, buy things, trade things, race cars and gamble, work-out in the gym, buy, sell and rent property, travel to other countries, and of course attack others, to name but a few. It goes without saying however, that all efforts will assist you in becoming a master criminal and ultimately top-dog in TORN City.

On the subject of marriage; Watch out [enter your favourite dating website here], TORN City has seen no fewer than five real-life marriages due to virtual marriages within TORN City.

We also mentioned that you can get a job, or start your own company in TORN City. Believe it or not, off the back of this, players have been offered real-world careers from their virtual bosses, based solely on their hard work in the game.

TORN City’s community manager describes the TORN community as the most dysfunctional family you could ever meet, but it really works. She recently asked new members of the community why they liked TORN City and how they’d describe a text-based online game to their friends. Their response was so positive, she decided to post them on TORN City’s blog… but here’s the kind of things they said.

“I hate video games but for some reason I’m addicted to this freaking game. I think my log in count is over 3k time’s lol… and I have only been playing for a little over a year. Do the math…”

The TORN City experience is unique. Unlike any other game you’ve played before. There’s purposely no visible EXP bar, which instantly makes the game more strategic and discourages the mindless button clicking found in similar games. Plus it’s a great surprise when you level up!

The Facebook game will be a lite version of the full browser game, revealing just some of the awesome features you can expect to find in the full game. Full TORN operates a freemium model, where small donations are exchanged for in-game benefits such as faster recovery times. The Facebook version will also be 100% free to play with the option of buying TORN City points for extra pizzazz.

With its cult following and heroin-like addiction the team at TORN have high expectations for Facebook TORN City; due to launch September 1st, 2011 - http://apps.facebook.com/thetorncity/ 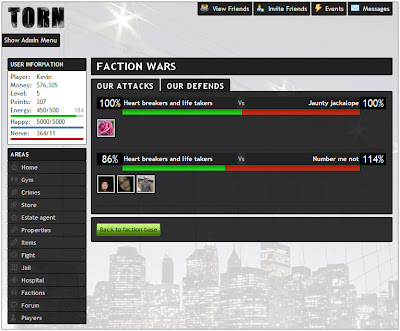 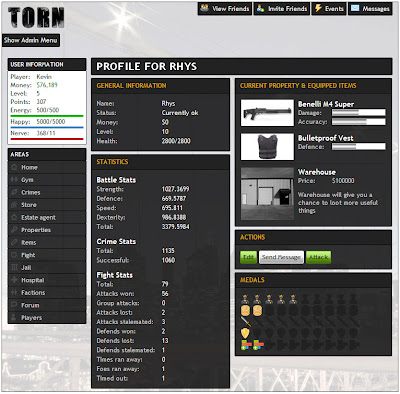 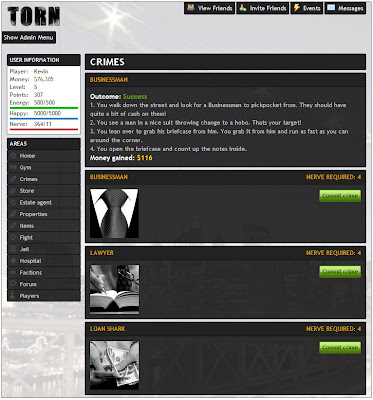 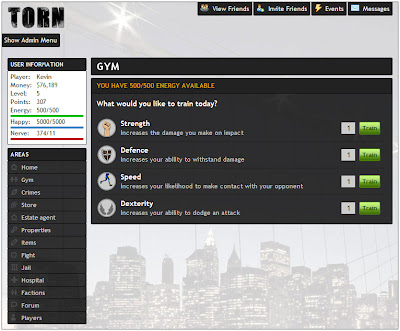 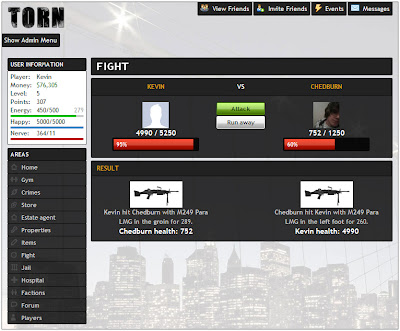 Ive played this a few times , it isnt bad at all.