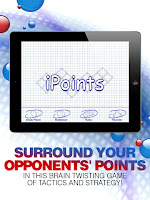 Moscow, Russia - Independent developer Artem Vlasko today released the updated version of his board game known as iPoints HD. The developer transformed iPad into a board with the challenging strategy game of wits and tactics for the whole family. Updated version features new graphics, further improved functionality, and new AI logic for ultimate gaming experience.

Family board games of strategy will never go out of style because people have that competitive streak in them. Certainly not a game of chance, iPoints HD is a game that involves risk, strategy, provides hours of enjoyment and competitive fun. The objective of iPoints HD is to surround as many rival points as possible before the opponent managed to do it first.

iPoints HD helps to keep brain sharp while playing against artificial intelligence in single player mode, or a human opponent in multiplayer mode. 'Play and Pass' multiplayer mode lets users play with a friend on a single device. There is also a possibility to play with a random opponent or choose a rival by name playing online. One of the landmark features of the title is that a random opponent for the player is chosen by won/lost statistics which means that both players will be of equal ability and have a fifty-fifty chance to win or lose.

"Our game is a present for all iOS devices users who enjoy a strategy game challenge. We didn't use sophisticated graphics keeping our mind on the game itself, its functionality, playability, and replay value. " - said Artem Vlasco, independent developer. 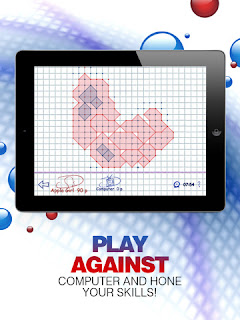 Pricing and availability:
iPoints HD 2.1 is $0.99 USD (or equivalent amount in other currencies) and available worldwide, exclusively through the App Store in the Games category.


Artem Vlasko is an individual iOS developer whose main objective is to create high-quality and user-friendly games for a broad audience. He believes that the game should be challenging and with high replay value.
*visit the iTunes, App Store and Mac App Store*
Labels: ipad, new release, strategy