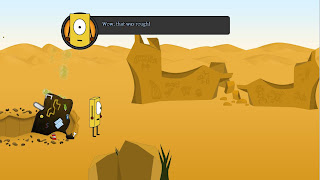 Space Madness is a great little adventure game, the first release by German developer Spreadcamp, and features a yellow life-form who’s the direct result of an experiment gone wrong.  (I am unsure whether his resemblance to Spongebob Squarepants is incidental or intentional.)  As so often happens, it turns out that the evil scientist who accidentally created him has to be prevented from destroying the universe.  So our character, who will later rejoice in the name Ed, tries to save the universe, after an ignominious start to his life, landing on a remote planet through the starship’s garbage chute. 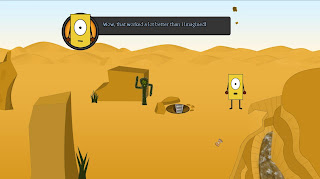 The graphics are nothing special, but they get the job done and there are some nice little touches and quite a lot of attention to detail.  The game has the look and feel of a cartoon most of the time, which suits it nicely.  The animation also is pretty good.  The sound effects are functional, and the music ranges from okay to good, with some quirky tunes also suiting the game’s atmosphere very well.  Sadly there is no voice pack currently.

One thing I instantly appreciated about Space Madness was the interface – very clean, simple and effective.  The game is not particularly difficult and usually provides plenty of clues; just a couple of times I found the puzzles a bit obscure, but for the most part the logic holds up.  Most puzzles involve using / combining inventory items, but there are a few other puzzles here and there, including one where you have to build a spaceship by piecing and rotating the pieces into the correct place.  These other puzzle elements are nicely done, not too difficult that anyone might get stuck on them for ages, and they adds some nice variety into the game. 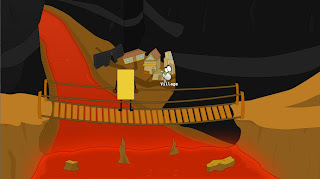 Some of the dialogues are good, most are just okay.  The English translation, bar a couple of instances where the language didn’t flow quite as well as it might, was very good – much better than some adventure games I’ve played that had big teams and publishers behind them, in fact.  While I wouldn’t rate the dialogues overall as more than average, the humour frequently interjected into the game more than makes up for that.  It probably goes without saying, but you’ll enjoy the humour most if you’re a fan of both adventure games and science fiction.  The storyline is pretty good and obviously very tongue in cheek. 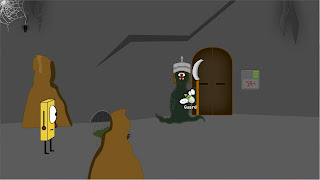 There is a slight casual game element in Space Madness, in that you have collectables (smileys - which aren’t important to completing the game itself).  The game also shows you new “Mission Objectives” as you progress through the game, meaning that you’ll rarely be unsure what to do next.  It also gives you a score, which is presumably out of a total of 1,000 (I completed the game with 960 points – I missed one smiley, not sure if there was anything else I missed).  You also get a rank that changes as you get further into the game – the descriptions of your rank are quite fun.

Overall if you like science adventure games, you’ve going to love this one.  I didn’t time how long it took us to complete it; my guess would be that most players would take 4-5 hours.  It’s accessible enough for new adventure gamers, and entertaining enough (especially with all the in jokes) to keep seasoned adventurers happy too.  Possibly a bit too highly priced at the moment ($9.95) for the play-time, although even then, when you compare it with some of the recent episodic adventure games from TellTale, it isn’t too bad.  At any rate, Space Madness is certainly a very enjoyable adventure game, and I hope the game’s thinly veiled threat of sequels happens!