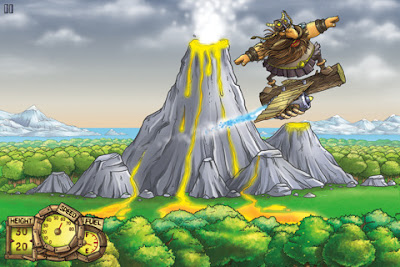 London, United Kingdom - The Pixelmator Team, developers of Pixelmator - a popular, award-winning Mac image editor - today released Flapcraft, a game for iPhone, iPad and iPod touch. An arcade-style game, Flapcraft lets users play as a handsome Viking doing tricks in the air by flying on a wooden log. To perform these tricks more easily and effectively, and to fly faster and further, the wooden log can be upgraded with wings, rockets, engines and more.

"Flapcraft is an adventurous, one-time project of the Pixelmator Team that was developed during beta testing of Pixelmator 2.0," said Saulius Dailide of the Pixelmator Team. "We couldn't keep ourselves from releasing it when we realized that its incredible graphics, addictive gameplay and exclusive iOS technology support meant that Flapcraft has every chance of becoming one of the most fun games out there for iPhone, iPad and iPod touch."

Comic-style graphics and attention to detail make Flapcraft not only a joy to play, but also a pleasure to look at. Thanks to complete Retina display support, the already impressive game graphics are spectacular on iPhone 4 and iPod touch. Meanwhile, exclusive support of iOS device technologies such as Multi-Touch and Accelerometer makes playing the game as easy and fun as simply touching and rotating the iPhone, iPad or iPod touch.

Pricing and Availability:
Flapcraft 1.0 is available on the App Store for $1.99 (USD) in the Games category. Flapcraft is a universal app that will fully support all iOS devices once downloaded, whether iPhone, iPad or iPod touch.


Founded in 2007 by two brothers, the Pixelmator Team develops a practical, fun, innovative, and easy-to-use image editor for the world's most sophisticated operating system, the Mac OS X.