Strasbourg, France - Independent app developer, Jeremie Klemke has released Tank War Battle 1.0 for iOS. It's a challenging 2D tank turn based shooter game inspired from the famous bestseller game, Worms. The game is challenging, perfect to play with friends on the same device or spend hours challenging and battling other computer at different levels and trying all the maps.

Tank War Battle is a simple 2D tank turn based shooter type of game with nice graphics and a variety of different maps. The game contains a varied arsenal of weapons arriving randomly. You can play with a friend or against a bot. You can set five different bot levels. The artificial intelligence of the best level is almost unbeatable. 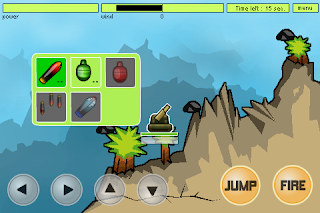 Pricing and Availability :
Tank War Battle 1.0 is $1.99 USD (or equivalent amount in other currencies) and available worldwide exclusively through the App Store in the Games category.

Located in Strasbourg, France, Jeremie Klemke is an Independent graphic designer and developer.