Boston, Massachusetts - Golden Hammer Software, makers of Big Mountain Snowboarding, have released of Scribble Worm for Mac, a revolutionary new puzzle game. Use a mouse or multiple fingers on the trackpad to draw new worms that move based on the patterns you draw. The patterns come to life as cutesy worms scribbled in crayon, wriggling their way across the paper. The goal is to reach an apple elsewhere on the page by drawing a shape and anticipating the path of the resulting worm. 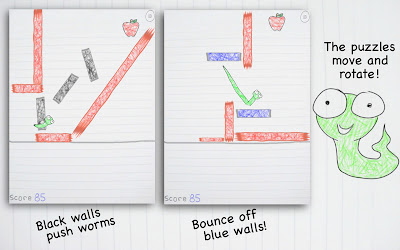 "It's a little like Flight Control in reverse," says Co-Founder David Wingrove. "Instead of telling the worms where to go, you tell them how to move before setting them loose to navigate the obstacles."

Co-Founder Katie Merrill adds, "When I saw the game mechanic I knew we could make some great puzzles with it. People have compared it to Angry Birds even though it's a very different game."

Each puzzle page contains a different set of obstacles and requires a different drawing technique to complete. The puzzles range from shaping a worm to maneuver around static boundaries to bouncing trick shots and timing against moving walls. The difficulty ramps up quickly from a simple and intuitive introduction to the mechanics to challenging puzzles that force the player to really think ahead.

Wingrove states "Mac is a great platform to develop for. We're continuing to try to use the multi-touch support available on most Macs in new ways. We used it as an analogue joystick in Big Mountain Snowboarding, and now we're using it to draw multiple worms at the same time."

Pricing and Availability:
Scribble Worm for Mac is only $0.99 USD (or equivalent amount in other currencies) and available worldwide exclusively through the App Store in the Games category.