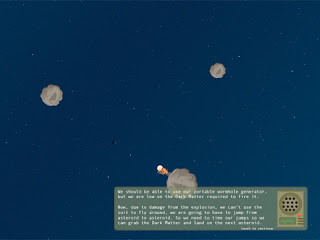 Boston, Massachusetts - You have been stranded 100 light years from Earth, can you survive the long way home? Indie Developer Jonathan Mulcahy is pleased to introduce A Long Way Home 1.0 for Mac and iPad. After a catastrophic ship explosion, you must make your way home 1 light year at a time. Encounter exploding asteroids, teleporting dark matter, comets and more on your epic journey home.

A Long Way Home is a action / physics / puzzle game set in space. Making you way through 100 levels across 10 stages you must jump from asteroid to asteroid collecting enough dark matter to open a portal to the next level. This is Jonathan's fist game to launch on both the iPad and Mac simultaneously.

Pricing and Availability:
A Long Way Home is available now for the Mac and iPad through the Mac App Store for $1.99 (USD).

Jonathan Mulcahy is an independent software developer living 30 minutes south of Boston, MA. Previously released games include Z is for Zombie, V is for Vortex and F is for Falling, all of which have been featured by Apple. When not developing iOS Games, he spends his time at home with his Wife and Daughter.
Labels: ipad, mac, new release