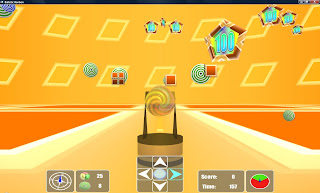 Ballistic Bonbon by XINK Games is a simple but challenging game where you shoot targets using a cannon – you control the angle and trajectory, and time carefully when you the fire.  Well, saying it’s simple... it starts out that way, but it soon becomes more complicated! You are playing against a timer to hit all of the targets – you also have a limited number of shots to fire, so a gung-ho approach is definitely not recommended!  Your task is made more complicated by obstacles, moving targets, moving walls, walls that won’t move until you shoot them, spinning walls, dominos, buttons and many more – each new level brings new helps and hindrances.  Some targets might appear (or move) beyond the screen; you can pan round to keep track of these / line up your sight to the cannon’s angle.  You have a choice about how to play each level – just try to complete it (challenging enough for most of us, at least initially!) or play for higher points (in which case the order you hit the targets matters). 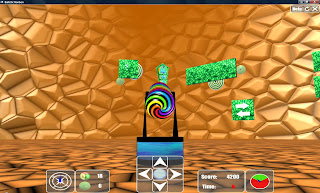 Bonus targets pop up fairly frequently – you don’t need these to complete the level, but obviously they add to your score.  Will you have enough shots left to get the final target if you go for the bonuses as well?  This is what you have to decide each level – all the while keeping an eye on the timer.  Another thing about bonus icons is that your shot continues moving when you’ve hit them – so with multiple bonuses in a line, it’s possible to hit several with the same shot.

The graphics are nice – a really psychedelic feel to them.  The soundtrack is excellent - the sound effects are okay and the music (largely jazz funk) is really great (at least, it is if you like jazz funk, which I do).  The interface takes hardly any time to get used to, although judging distances so you can line up your shots effectively is another matter – the level of challenge is pretty high, although learning how to properly sight your shot by changing the camera angle helps enormously. 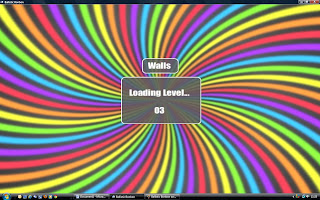 You get a score at the end of each level, and upon completing a level you will then be able to use that as a start level in future games.   The contextual help feature is neat – the help button is unobtrusively tucked away at the top right of the screen along with the Restart Level and Return to Menu buttons.  It gives you help based on what level you’re on – which is very useful considering new features are added in so many different levels!  There’s also a nice feature that, after level 4, you can find a key on each level – once you have 5 of these you can “buy” your way past future levels if you just can’t manage to get past a level the normal way.  There are 25 levels in the full game (5 in the free demo) which doesn’t sound like a lot, but since the levels are very challenging, it will take you a good while to play through them – and of course you can always go back and go for a higher score, of course.

Ballistic Bonbon is a fun and challenging game; my one real criticism is that I felt the levels should progress in difficulty less severely than they did.  Still, it adds to the feeling of accomplishment when you do beat each level, and the “key” system is a nice addition.  The contextual help system is genuinely helpful (and personally I rather prefer it to having a tutorial to complete), but the fact remains that some levels will have you pulling your hair out.  There are a few typos in the help descriptions, but nothing that obscures the actual meaning of what’s being said. 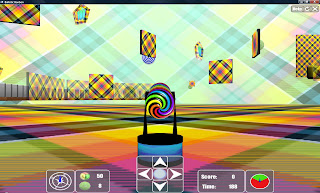 I think a large part of the game’s perceived difficulty is that it isn’t immediately obvious just how much finesse it’s possible to attain with the controls (at least, I didn’t realise) – this renders some targets apparently impossible.  When you realise that a fraction of an angle can get you where you want to be, the frustration level comes down.  By level 7 you find out how you can change the sensitivity of the cannon movements too.  Another thing that can sometimes be frustrating is that some targets are difficult to see, even when you pan the view right round.  On a number of occasions I thought I’d completed a level only to see the timer still going...  Some indication of which ones you’d missed, on levels where some were really obscured from view, would have been helpful.  Still, the game does tell you how many targets you have left, so you do know if you need to find one that you haven’t seen yet.

If you like target-shooting games (especially ones that require a bit of lateral thinking in addition to accuracy) then Ballistic Bonbon is for you.  I’ll admit that I didn’t take to the game at first, but after persevering and realising a few things about how the game worked, it became a very enjoyable challenge.  At €4.99 it’s a lot of gameplay for not a lot of money (and it looks like more levels are going to be released free for registered users). 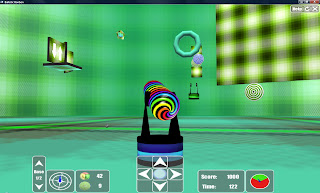 There’s now also an Easy Mode (version 1.1 update) which gives you more balls (if you’ll pardon the expression) and more time for each level – twice as much of each, in fact) – a very welcome addition!!  Though a lot of levels are still really challenging...

Hints (not that I'm particularly good at the game, but these ideas might help if you're struggling...):

-        - If it’s a level you’ve never played before, look at the help first!  (I failed to do this at first but realised the folly of my ways later...)
-        - If you know particular targets on a level are problematic for you, try to get them first.  If you manage in a small number of shots, you’ll know you have a good chance of completing the level
-         - Don’t forget to line up your shots!  Predicting the trajectory of a shot is much harder when viewing it from an angle rather than right behind the cannon
-         - Things really not working out?  Perhaps you need to try doing things in a different order
-         - Shot seems impossible?  Maybe you can rebound off something...
-         - Shot seems nearly impossible?  Then it probably isn’t... tiny adjustments may be all that’s needed!
-     - Don’t forget to find the hidden keys – you may need them later!  Though some of them are pretty well hidden... 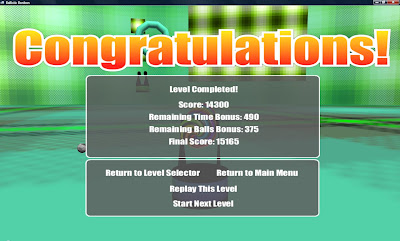