WordUs2 for iOS - Make Fun a Part of Your Lexicon

Word nerds rejoice! Binary Dawn Interactive Inc. announces WordUs2 1.0 for iOS, their second release in the App Store. Inspired by popular TV game shows, WordUs2 focuses on entertaining and educational gameplay. Wordsmiths test their acumen as they attempt to guess a mystery word given only the first letter. WordUs2 comes with a dictionary of thousands of words, with four exciting game modes. WordUs2 features OpenFeint integration. 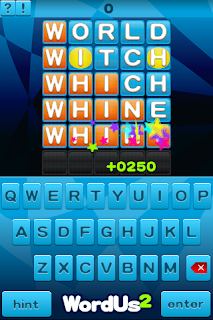 St. John's, NL - Word nerds rejoice, because independent mobile entertainment developer Binary Dawn Interactive is back with their second release in the App Store. WordUs2, inspired by popular TV game shows such as Lingo and Motus is now available for download.

This word game was actually an early hit on the PalmOS and has now been updated and improved for Apple's iOS. "In fact, there have been so many enhancements to the original game that it only made sense for us to call it WordUs2", said Robert Reynolds, Vice-President of Binary Dawn Interactive Inc.

Forget the mumbo jumbo, WordUs2 with its focus on entertaining and educational gameplay was a top 10 game on launch in Canada and quickly rose to #1 on the iTunes 'New & Noteworthy' word game chart. Word slingers have been busy building up their linguistic prowess as they work to solve the various puzzles and are fast becoming fluent in the language of fun!

The idea of the game is simple: Wordsmiths test their acumen as they attempt to guess a mystery word given only the first letter. After each guess, if a letter is in the correct spot, the square will appear orange. If the letter is in the word yet in the wrong place, the letter itself will be surrounded by a yellow circle.

WordUs2 comes with a dictionary of thousands of words. There are four exciting game modes: "Calm & Collected", "Every Guess Counts", "Think Fast", and the "Six Minute Sprint". Each mode features different twists and challenges that are sure to keep players of all ages guessing for hours on end. WordUs2 features OpenFeint integration so you can compete with your friends for achievements and top position on the leaderboards.

"We've focused on building a challenging app that will really give your brain a workout as we test your vocabulary," added company president Roddie Kieley. "Even though it's a relatively simple game, WordUs2 is amazingly fun and addictive. We believe this is our strongest effort to date."

Pricing and Availability:
WordUs2 1.0 is only $0.99 USD (or equivalent amount in other currencies) and available worldwide exclusively through the App Store in the Games category.