Florida based indie developer, Isotope 244 today announces Land Air Sea Warfare 2.0, an update to their real time strategy game for Mac and Windows. Command a force of thousands of units into strategic warfare in this new real time strategy game. Fortify your base with turrets, surface to air missile launchers, torpedo launchers, and long range cannons. Version 2.0 contains over 1000 changes since the previous release.

Tampa, Florida - Indie developer Isotope 244 today is pleased to announce that Land Air Sea Warfare v2.0 is now available for Mac and Windows. The new version contains over 1000 changes since the previous release! Thanks to it being on many platforms the game is now easier to play and more stable than ever before, and now supports four languages.

Command a force of thousands of units into strategic warfare in this new real time strategy game. Fortify your base with turrets, surface to air missile launchers, torpedo launchers, and long range cannons. Next create factories to pump out enormous legions of vehicles, aircraft, and ships to wage war with, you decide what to build. Form groups with the easy to use grouping interface and transport units to prepare for an assault on the enemy!  Finally execute your strategic battle plan and enjoy the immense carnage that ensues. With unique explosions, wreckages, sound effects, and animations for every unit the carnage is as beautiful as it is deadly. Discover and mine unique resources to build gigantic mega units which can turn the tides of war instantly!

As the commander of a massive war campaign you can navigate stealth aircraft and submarines on recon missions, airlift units into the fight via helis, scout tread marks left by enemy tanks to their base, and hide under trees for an ambush attack. You can expand your city with over 100 structures and units to choose from. As your empire grows you can research technologies to guide the focus of your strategy. Dominate on all types of terrain, send aircraft to bombard the enemy to weaken its infrastructure, control the shores with a naval fleet of ships and subs, and transport units into the fight to finish the mission!  You can even manufacture and launch game changing weapons such as ICBMs.

Land Air Sea Warfare features a random map system so every game you play is unique and poses new challenges. There are also several victory types and settings to customize the game and provide fresh missions. After each battle detailed statistics are displayed showing the how the tides of war changed for each player. 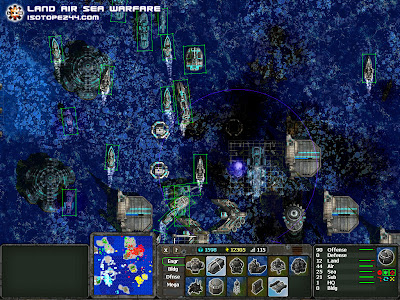 Major Changes:
* New tactical map, it's a big minimap mode with detailed icons so you can have an immediate overhead view of the whole battle with more details than the minimap can provide. You can do everything in the tactical map you can do in the game, select units, group, move, attack, build and place units, queue factories
* New feature Elite units that gain experience levels with more kills and display medals based on level and tech
* New feature Newts can now convert enemy units
* New T1 AA defensive unit GAAM
* Many AI updates and changes to make it smarter, and harder on Robotic setting
* French, German, and Italian translations now included
* New orders menu with icons, order descriptions, and new commands such as follow and salvage a unit
* Easier to use interface. Click and hold to set groups and double click to quickly view groups
* Massive performance increases, 42% increase in blended water rendering speed, 30-40% increase fog rendering speed
* New feature to display health bars when units are attacked
* Moving multiple units at once now moves the units while holding the same formation they started with (if the units start close together)
* On large displays the game no longer draws fillers on bottom sides for a better view of the game
* Unit balancing for many units

Purchase for Mac and Windows: http://www.isotope244.com/order-lasw.html

Since 1997, Isotope 244 has been a one man indie company developing games. Isotope 244 was started due to their love of programming, gaming, and art. Recently Isotope 244 has been working on their latest game Land Air Sea Warfare for the last two years. In the past Isotope 244 created award winning games such as Machines at War, Atomic Cannon, Acky's XP Breakout, and Atomic Battle Dragons.
Labels: ipad, iphone, mac, new release, pc, strategy, Windows 7 phone