Seoul based RecoSystems today announces Daring Raccoon 1.5 for iPhone, iPad, and iPod touch. This mobile arcade game blends action and user agility with puzzle solving elements to provide players with an enthralling mobile gaming experience that is as entertaining as it is addictive. This uniquely themed adventure game is composed of over sixty challenging vertically integrated levels where players must run, jump, and climb their way to victory in order to progress from one stage to the next.

Seoul, Korea - RecoSystems, an emerging mobile game and application developer, today announces the launch of Daring Raccoon version 1.5 for the iPhone, iPad, and iPod touch. Building on the established success of the original Daring Raccoon - which came to prominence as the fifth most popular game in Korea's App Store at certain points - the developer is optimistic that this updated version of their game is positioned to experience an even greater degree of popularity among Apple consumers.

Daring Raccoon was developed with a focused on synthesizing the mental engagement which maze-based puzzle games offer together with the sheer excitement provided by classic arcade action games. The result is a uniquely themed adventure game composed of over sixty challenging vertically integrated levels where users must run, jump, and climb their way to victory by collecting every piece of fruit in order to progress from one stage to the next. Daring Raccoon version 1.5 is currently available for $0.99 on the iTunes App Store.

Each stage within Daring Raccoon is structured as a vertical maze comprised of platforms and ladders. The user - stepping into the shoes of a quick witted Raccoon - is tasked with maneuvering their way from the bottom to the top of the screen, picking up treasure jars and valuable fruits along the way. Though every fruit must be collected in order for players to progress from one level to the next, treasure jars each offer mysterious prizes which can range from bonus points to deadly snakes.

Simultaneously, users must avoid enemies such as green and red bugs, as well as blue and yellow ducks along the way. If lucky, users will find wings which give them a rare opportunity to fly for the duration of one stage, a feature that may prove important to utilize in certain levels in order to successfully overcome every obstacle on some of Daring Raccoon's more challenging stages.

Though more than 60 entertaining levels are included in Daring Raccoon users also have the ability to develop custom levels to play through with the app's Build function as well. Once users have completed building a custom stage, they can easily post and share their creations via the app's dedicated website. Furthermore, if players download stages custom built by other users they can quickly and easily post feedback to a given stages creator via Twitter.

Daring Raccoon - a remake of the popular Korean mobile game iPonPoko - utilizes a classical retro aesthetic to bring users into an arcade gaming experience in the vein of timeless icons of the arcade genre such as the original Mario and Donkey Kong. With the launch of Daring Raccoon version 1.5 RecoSystems proves that classic puzzle minded arcade entertainment is alive and well on the Apple App Store.

Pricing and Availability:
Daring Raccoon 1.5 is only $0.99 USD (or equivalent amount in other currencies) and available worldwide exclusively through the App Store in the Games category. 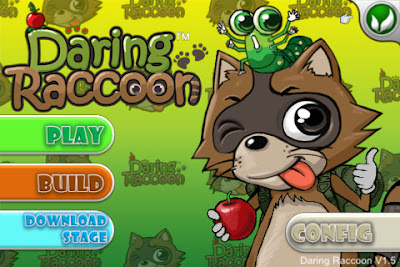 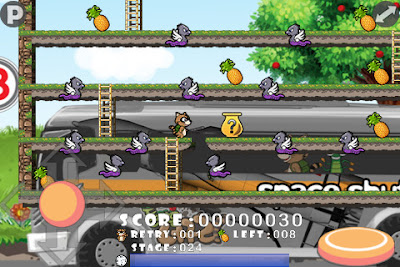 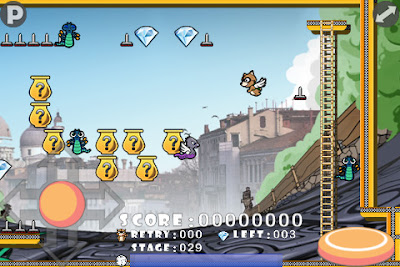