Jump from an air ship right into fun with Parachute Xtreme!

Jersey City based Spiel Studios today announces Parachute Xtreme! 1.0 for the iPhone, iPad, and iPod touch. Created as a comically strategic survival game, Parachute Xtreme! throws the user into a base-jumping adventure in which they jump from a stationed air-ship with the aim of opening their parachute and safely landing on the ground before any other opponents. With only one life, players must keep winning in order to survive and progress through the game.

Jersey City, New Jersey - Spiel Studios, a burgeoning developer of mobile games, has announced the release of Parachute Xtreme! 1.0 With a focus on strategic racing action, this level based survival game tasks users with utilizing their cunning and agility to safely navigate themselves towards the ground as quickly as possible so that their opponents do not finish ahead of them. With only one life, players must keep winning in order to survive and progress through the game. Tying in arcade elements with a comedic execution, Parachute Xtreme! is currently available on the iTunes App Store for mobile Apple devices running on iOS 4.1 or later.

This survival adventure offers a full featured mobile gaming experience. The app includes 64 challenging levels set on 8 unique worlds from where users can utilize their quick reactions to out race and out gun their opponents on the way to the ground. Besides simply racing downwards, players can pick up one of six different power ups that can potentially aide them on their way to victory, keeping them alive to go further and further into the game. Health packs give users an extra dose of health to aide their chances of survival, meanwhile the God pack makes players thoroughly invincible for the duration of one level.

For added speed users can pick up a Nitro Boost pack, or an Instant Parachute pack which allows users to fall closer to the ground before needing to open their parachute, lessening the time the need to slow down and land safely. To get a wickedly fun advantage on their opponents, users can also pick up Machine Gun and Terror from Hell packs. The first of these lets players shoot their opponents once users open their parachute, while the Terror from Hell pack allows players to automatically kill one opponent before anyone even jumps from the ship!

Parachute Xtreme! has a simple user interface and intuitive controls which make accurate and responsive game play easy to achieve. Players tap their device's screen once to jump - beginning a level - and once again at the end to open their parachutes at the appropriate moment. During flight users simply tilt their device in different directions in order to control their character through their descent, collecting bonus points and avoiding obstacles. A mentally engaging survival game, Parachute Xtreme! holds enough full-out entertainment value to bring consumers a game that is as filled with action and strategy as it is addictive.

The game includes Facebook, Twitter and Game Center integration to directly upload player's scores and achievements which the player can unlock during the gameplay.

Pricing and Availability:
Parachute Xtreme! 1.0 is only $0.99 USD (or equivalent amount in other currencies) and available worldwide exclusively through the App Store in the Games category. 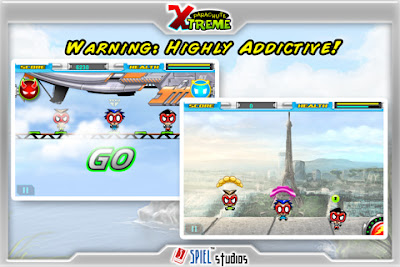 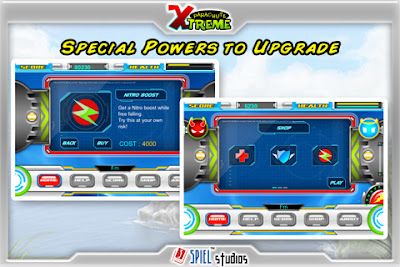 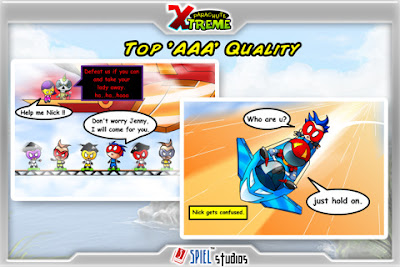