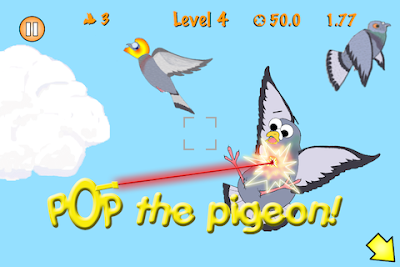 Pop The Pigeon is an accelerometer controlled action/arcade game. It features novel game play where the player is looking up into the sky through the sight of a weapon called the Pigeon Pumi-Laser. This isn't simple pigeon shooting though, you must steer the sight onto the pigeons tracking them long enough for the laser to heat them until they pop (cartoon funny - not gore). The challenge is that the pigeons don't stay still, they recover if they move out of the sight, it takes quick reactions and anticipation to keep the laser on them. As the game progresses the pigeons get faster and sneakier and special weapons and power ups become available to help you out. On each level you must clear the pigeons inside a target time to progress.
Feature Highlights:
* 8 Fully Featured Levels from Pop The Pigeon
* Special Weapons and Power Ups
* Game Center Support
* Loads and Loads of Pigeons

Pricing and Availability:
Pop The Pigeon Lite 1.0 is free and available worldwide exclusively through the App Store in the Games/Arcade category.