AppMania today unveils Demolition Master: Space Quest, the sequel to their most explosive game for iOS. Your goal in each mission is to demolish a construction with an explosive. In this version you will experience an exciting adventure in 9 locations throughout the Earth as well as in 3 locations on the new planet, the Moon. Overall there are 12 colorful locations and 180 unique levels, and their number will grow with every new update. 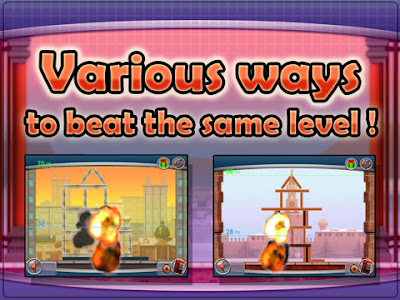 Kiev, Ukraine - AppMania company unveils its new product, Demolition Master: Space Quest. This is the sequel of the most explosive game in the App Store that already has over 400,000 downloads. Your goal in each mission is same as before, you need to demolish a construction with an explosive.

In this version you will experience an exciting adventure in 9 locations throughout the Earth (135 levels) as well as in 3 locations on the new planet, the Moon (45 levels). Overall there are 12 colorful locations and 180 unique levels, and their number will grow with every new update. The game is available in three versions:

Dramatic explosions with vibration, curious locations worldwide together with charming music, adrenaline, and hunger for victory are among the feelings that the "Demolition Master: Space Quest" will create for you.

* Realistic physics of explosions and destruction
* 180 exciting levels
* Levels in the countries throughout the world: the USA, China, Russia, Peru et al
* Zoom in separate game details, level select option
* Listen to the music from your iPod library while playing
* Dynamic music
* Look through the level before playing
* Look through the scores of the best destructors of the world
* Retina Display support
* Social gaming network "Game Center" support

Pricing and Availability:
Demolition Master: Space Quest is available all over the world exclusively through the App Store (Apple online store) in the Games category at the price of $1.99 USD (or the equivalent in another currency). Regular free updates with new locations will be available in the closest time.

AppMania is the independent game development Company with the central office in Kyiv (Ukraine). AppMania has been working on the gaming market since 2008 now and specializes in game apps for mobile platforms development. It is the author of such released successful projects as "Demolition Master", "DreamBook", "Farm It!", "BattleSheep!" and "Cats, !nc. that hold leading positions in the game rating. The company's mission is to make the everyday life more comfortable and interesting, for this purpose we're permanently looking for new and original ideas. The company has in its arsenal the smoothly running process, initiative team working well together and having such priorities as efficiency and creative approach to the problem solving, and high technical proficiency.
Labels: ipad, iphone, ipod touch, new release