Attack Kumquat HD includes an integrated tutorial, and requires players to unlock levels sequentially (once unlocked, a level may be skipped or re-played). In Episode 1 The Arctic, Level 1, players are introduced to the object of the game, "The aim of the game is to squash kumquats." A four-panel sequence illustrates how touching the green Play button releases the metal canon ball. Playing Level 1 displays an orange, eye-blinking kumquat on the snow-covered ground. A virtual pan reveals three stationary layers: ice-packed ground containing a snow hill with a kumquat on top in the foreground, snow-encrusted evergreens in the midground, and dark snow-capped mountains in the background. A deep blue, photorealistic cloudscape moves across the screen behind the three layers. Touching the Play button, the metal ball above the kumquat is released, falls, and squishes the fruit. An orange splatter pattern is all that remains, the musical fanfare plays, and the points gained are displayed. 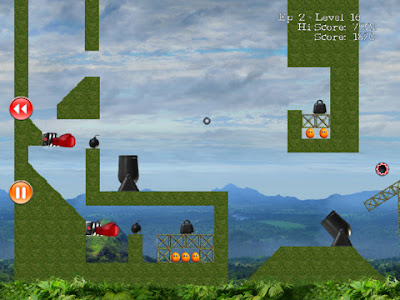 The Level 2 tutorial shows a spherical bomb with lit fuse, and demonstrates that the bomb pickup is unlocked by dragging and dropping it to a place onscreen where its red selection glow turns green, "The bomb will explode when hit." In this position four green arrows surround the bomb, indicating that it can be moved again, or the player can select another pickup. Playing Level 2 displays the kumquat atop a tower of ice blocks. The metal ball is set to fall down an inclined plane of ice and into the tower, while the bomb, in the top left corner, awaits unlocking. Touching play proves that the metal ball dislodges but does not collapse the tower. Only two areas on the screen allow the bomb to be dropped: on the ground beside the tower, or on the tower beside the kumquat. Touching Play sets the ball free; it falls, rolls down the side of the plane, rolls into the bomb, explodes the bomb while knocking it into the base of the tower, the tower collapses, and the kumquat falls to the
ground and is squashed.

Level 3 shows how the trampoline pickup is unlocked in the same manner as the bomb, and "You can use the trampoline to bounce the metal ball." This time dropping the pickup is more difficult, as the player must estimate the ball's momentum as it rolls down the plane, hits the trampoline, flies over the gorge, and rolls into the kumquat. Level 4 increases the number of elements in the chain reaction needed to squish the fruit. One bomb and one trampoline must be properly place before letting the metal ball fall. At Level 5 the player must successfully create an action/reaction sequence using two trampolines and a bomb. Higher levels require the player to do virtual panning across the screen to understand the problem completely. The virtual perspective of the foreground moving horizontally faster than the midground, which moves faster than the background, enhances this effect.

Pricing and Availability:
Attack Kumquat is $3.99 (USD) and available worldwide through the App Store in the Games category.

Based in Aberystwyth, Wales, the Broadsword Publishing team is an independent software team founded by David Rowe, John Jones-Steele, Ken Bird, Steve Rose, Justin Slater and Jim Finnis. The company is owned and run by a group of dedicated industry veterans who collectively have 120 years experience developing software.