RITTER Informationstechnik today releases Decoloro, their highly addictive game for iOS. Imagine you have the fun of pinball, the challenge of Memory and the arcade feeling of Labyrinth combined in one game. In Decoloro you have to tilt your iOS device to guide a ball through one of the 26 levels. Each level is built like a maze and littered with obstacles like magnets which attract or repulse the ball, skulls, holes, gems and orbs.

Dingolfing, Germany - Imagine you have the fun of pinball, the challenge of Memory and the arcade feeling of Labyrinth combined in one game. Decoloro for the iPhone and iPad is a highly addictive and easy to learn game where you direct the ball by tilting your iPhone or iPad. With its realistic physics, amazing graphics and stunning sound effects Decoloro went straight to #1 in France and entered the Top Ten in several other countries.

In Decoloro you have to tilt your iOS device to guide a ball through one of the 26 levels. Each level is built like a maze and littered with obstacles like magnets which attract or repulse the ball, skulls, holes, gems and orbs. You have to bump into the different orbs to reveal what color they are. Once a orb has revealed its color you have to find the second orb with the same color. When both orbs with the same color are turned on they get de-colored and disappear from the maze. But not every orb will change colors. Some will hide deadly skulls that will bounce you around the board like in a pinball game, and others will contain power-ups. So it's the player's turn to direct the ball through each level with cleverness and concentration. 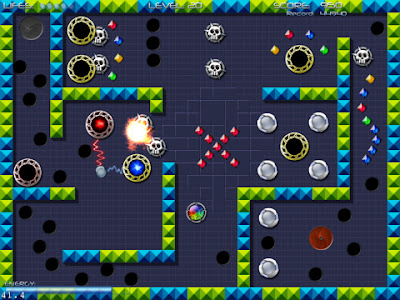 Decoloro was featured by Apple as a "Staff's Pick" in Germany in the games section and is was featured on the App Store in over 250 different places under sections like "What's hot" or "New & Noteworthy". On October 22nd and 23rd Decoloro HD for the iPad was for free on the App Store available and entered the charts in several countries. The arcade-puzzler topped the Game Charts in France and went to the Top Ten in countries like USA, China, Hong Kong, Taiwan or Portugal.

Phil Hornshaw from Appolicious summed it up in his review of Decoloro: "In short, Decoloro resembles something like an insane pinball-style puzzler that combines a lot of great elements from classic games. For a dollar, it's worth checking out."

Stefan Ritter and Stefan Hasslbauer - both Diplom-Informatiker (FH) and college friends - decided to join their professional efforts focussing on Apple iOS devices in early 2010, not anticipating that their joint venture would be fruitful so quickly. RITTER Informationstechnik, specialising on App development for iPad and iPhone, was established in January 2010. Stefan Ritter achieved 2nd place in the Worldwide Samsung Developer Contest in 2005 with his game BLAXX. This changed growing interest to making software development for portable/hand-held devises the main focus of his profession. Games are one of Stefan's passions since he started programming on Atari ST at the age of 16. Stefan Hasslbauer established UKANDO Software, solely specialising on iPad and iPhone, in May 2010. He is a passionate gamer and has almost 25 years of experience in programming. With assistance for sound, graphics and design, Stefan Hasslbauer programmed Decoloro HD in record time. After only 14 weeks of developing and programming, Decoloro HD was submitted to the Apple App Store.
Labels: arcade, ipad, iphone, ipod touch, new release