ITL Games today announces Alone 1.6 for iOS, an update to their retro, isometric platformer game. Following a deadly chemical-warfare attack, the city is in ruins. The player must find a vaccine for himself and his girlfriend, while gathering survival gear and fighting off enemies. The update features improved performance, new controls, accelerometer and shake actions, and more fluid movement. The two-thumb GUI features touchscreen weapons, unlimited levels, and restart at the last level.

London, United Kingdom - ITL Games today is pleased to announce Alone 1.6 for iOS, an update to their retro, isometric platformer game. Following a deadly chemical-warfare attack, the city is in ruins. The player must find a vaccine for himself and his girlfriend, while gathering survival gear and fighting off enemies. The update features improved performance, new controls, accelerometer and shake actions, and more fluid movement using a higher frame rate. The two-thumb GUI features touchscreen weapons, unlimited levels, and restart at the last level. Players may control their character using a diagonal joypad, a normal (horizontal & vertical) joypad, or tap on any of the four corners of the screen. 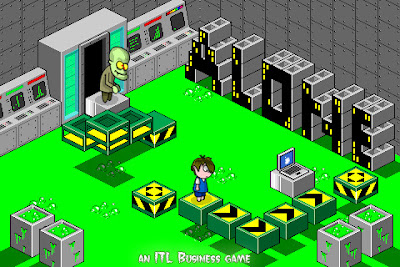 Reminiscent of classic 1980's isometric platformers like Head Over Heels, Batman (Ocean), Knight Lore, and Fairlight on Spectrum/Commodore/Amstrad machines, the room-based game provides an isometric, 3/4 view. Dominant colors include cinderblock grey, hazardous substance yellow & black, and bright ghoul green. There are a wide variety of ingenious 3D platforms and objects that the player must jump onto, move around, or push through. The current version includes ten levels plus four mini-levels that incorporate accelerometer and shake effects. With new levels downloadable on a regular basis, the game effectively has no limit to the number of levels.

Alone follows an exciting, end-of-the-world plot line. After a terrible chemical-warfare attack, the city is in ruins. The player must help their screen character through the traps and surprises that lie in wait. The player is "Alone". Everyone has evacuated the city and the ones who didn't make it in time are now crazed, dying, sub-humans. The player must find a vaccine for himself and his girlfriend before it is too late. There are rumors of an antidote at some military installations near the city. 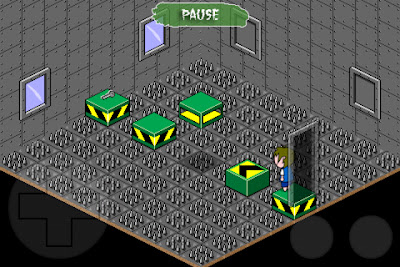 Playing Levels:
1. "First Steps" Kill all zombies and robots, but be careful with the girl.
2. "The Antidote" You are hiding in this military facility and your girlfriend is infected. Find the antidote or she will transform into a zombie.
3. "In the Woods" Kill the robot, but be careful with the green fluid.
4. "Starving" You are hiding in a warehouse. You are starving and need some food. Find something to eat and go back to the warehouse.
5. "The Cemetery" The cemetery seems to be the shortest way to get to your girlfriend. She is alone on the other side.
6. "On the Road" It's dark and cold outside. You need to find somewhere to stay before it's too late.
7. "Chemical Factory" You are locked in this factory and must find the way out as soon as possible. Don't forget to take the walkie-talkie.
8. "Locked" You managed to lock yourself in this building. You will need to find another exit. Keep the phone, you will need it once you get out.
9. "Underground Shelter" The oxygen reserve is almost finished. The regenerator is broken. You need to abandon the shelter as soon as possible, your girlfriend is outside waiting for you, hurry up.
10. "The Labyrinth" Find your way out through the labyrinth.


"I have been working as software developer for more than 12 years, focused really on server side development and databases, but also have strong background on Flash actionscript developing mini games and websites," stated developer Jose Miguel Gomez Gonzalez. "Basically, what I have developed is an isometric game engine I can use to generate games. Alone 1.6 is just the beginning, I am now working on an RPG/Adventure game, always using same engine, same isometric look, but just different graphics and scenarios, different type of game really."

Pricing and Availability:
Alone 1.6 is $0.99 (USD) and available worldwide through the App Store in the Games category. There is also a limited version available at no cost, Alone Free.