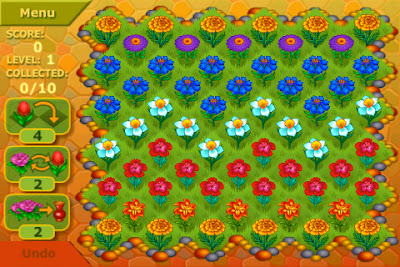 From its first release in AppStore it has made new changes. New version 1.2 supports Game center and Open Feint. Also new colourful flowers and new levels was added in the game. AppSafari about the game: "Generally speaking, Flower Garden is a satisfying challenge if you like puzzle games" and "best for non-gamers who just want a little extra mental stimulation."

Some facts about the history of creating the game. Why we decided to create this game for iPhone? We have on-line game Flower Garden and it has become one of the popular games in Russian social networks. After our succes we have developed version for iPhone. The first version of game was released on 10th of September. Developer of game is a new and rapidly growing company Sunmedia Games Ltd.

Pricing and Availability:
Flower Garden Logical Game 1.2 is $1.99 USD (or equivalent amount in other currencies) and available worldwide exclusively through the App Store in the Games category. Also HD free version is available in AppStore. Version for iPad will be available soon. If you would like further information on Flower Garden Logical Game or Sunmedia Games Ltd. please find contact on our web.
Labels: ipad, iphone, new release, puzzle