Sao Paolo based Best, Cool & Fun Games announces the success of Ant Smasher, the developer's newest entry into the mobile gaming market for iOS. Ant Smasher tasks users with using their finger to crush every ant and fly as they scurry across the game's playing field before they can run from one end to the other. A broad variety of stages force players to either utilize impeccable timing, quick reflexes, or simply all-out screen tapping fury in order to advance through the game.


Sao Paolo, Brazil - Best, Cool & Fun Games , an emerging game developer focused on creating games for mobile platforms, is pleased to announce the continued success of Ant Smasher since its initial release nearly a month ago. In addition to overwhelmingly positive user reviews, this innovative game has also been able to maintain both it's free and paid versions in the TOP 25 and TOP 100 Games lists on the iTunes App Store since their release. Structured around the simple act of crushing moving ants and flies with a finger while avoiding bees, this game successfully combines fast-paced action with necessary agility and quick reactions to create a gaming experience that is as simple as it is addictive. Ant Smasher is currently available for download on the App Store.

Designed to provide a simple and exciting yet casual gaming experience, Ant Smasher tasks users with using their finger to crush every ant and fly as they scurry across the game's playing field before they can run from one end to the other. To add to the challenge, users must take care not to touch the many bees that spontaneously fly across the user's screen at the same time. A broad variety of stages force users to either utilize impeccable timing, quick reflexes, or simply all-out screen tapping fury in order to advance through the game and collect as many points as possible before they're lives run out or they're stung by a bee.

Extremely detailed graphics ensure that the various bugs users smash while playing Ant Smasher are all dynamic and life-like in appearance. The game itself offers a healthy dose of diverse gameplay to users as well. Players encounter three different ant species, as well as flies, bees, and one giant ant that requires extra smashing power to stop. Points are awarded either by smashing bugs or grabbing bonuses that range from 5 to 100 points. Every smashed ant is worth 1 point, smashed flies are worth 10 points, while giant ants are worth 50 points. Users have the option to control the game's sound settings, customize the game's background using personal photos or wallpapers, as well as saving and resetting game scores.

Developed to encourage an engaged community, Ant Smasher tracks high scores locally as well as globally. The game is also fully integrated with Facebook and Twitter, allowing users to easily post and share their high scores with friends. The unique addition of a 'challenge' prepares an email so that users can quickly share the game with others as well. With a focus on providing fast paced addicting entertainment and structured to promote a social gaming experience overall, it is no mystery why Ant Smasher has both quickly risen to prominence on the Apple App Store and consistently maintained it's popularity among users since its release.

Pricing and Availability:
Ant Smasher 1.2 is only $0.99 USD (or equivalent amount in other currencies) and available worldwide exclusively through the App Store in the Games category. 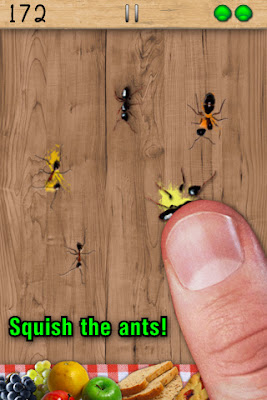 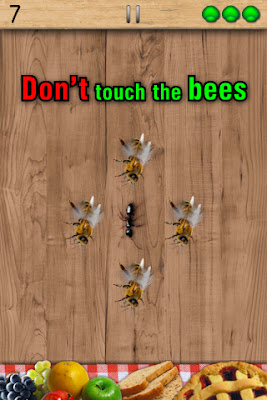 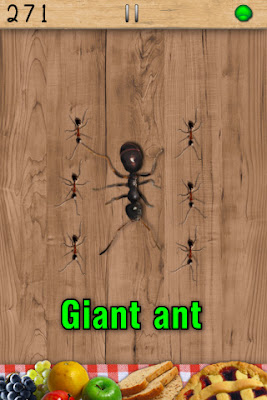 [CaptainD says... no insects were harmed in the posting of this blog.]
Labels: arcade, iphone