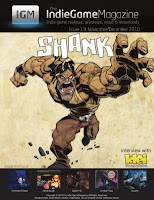 Issue 13 highlights include an in-depth review of Shank for PSN and XBLA. Shank is a violent 2D brawler and IGM interviews the developer, Klei Entertainment. There's also our massive Indie Road Map Feature that covers over 15 great indie games and freebies. We also review Spider HD for the iPad, Zombie Pizza for the iPhone and Ancients of Ooga for Xbox 360.

Among the issue's highlights is an in-depth review of Shank for PSN and XBLA and an interview with Shank Developer, Klei Entertainment. There's also our massive Indie Road Map Feature that covers over 15 great indie games and freebies.
In other IGM #13 stories, we review the IGF award winning Spider: The Secret of Bryce Manor HD for the iPad, Zombie Pizza for the iPhone and Ancients of Ooga for Xbox 360. Indie Game Mag also previews Xbox Live Indie Game, Alpha Squad and talks with the game’s developer, Dragon Divide. Issue 13 also features special advertisements and thank yous to all of the developers and people that made our Get Well Gamers Promotion a success. The Indie Game Magazine recently donated over $600 to the Get Well Gamers Charity which provides video game entertainment to sick kids in hospitals.

IGM is available for single purchase as well as via subscription in both print and digital formats, as well as the iPhone and iPad . To find out what you've been missing, visit the brand-spanking-new IGM website: www.indiegamemag.com.

ABOUT IGM:
Indie Game Magazine (www.indiegamingmag.com) is the premier source of news and culture for the independent gaming. Started in October 2008 and published bi-monthly by Mike Gnade, IGM has matured into a definitive voice for the indie gaming scene. Combining no-nonsense reviews, in-depth reviews and long-form features with the leading lights of the industry, the magazine, like the games it covers, is independently owned and fiercely independent as it strives to highlight the artists and community behind what it deems the most creative branch of the video gaming universe.
Labels: announcements