Brisbane based independent developer Cogniflame Pty Ltd today announces Flingy 1.2, an exciting update to their fun, pick-up and play arcade game for iPhone, iPad and iPod touch. Designed to keep you coming back for just one more go, Flingy features multiple levels with continuous art, original music for each level and is OpenFeint enabled for you to challenge your friends. Version 1.2 features user-controlled jets, mystery spheres, new bonuses and much more.

Brisbane, Australia - Cogniflame Pty Ltd , an independent developer of games for Apple's range of handheld devices, today is pleased to announce the latest release and immediate availability of Flingy v1.2 for iPhone, iPad and iPod touch devices. Flingy the robot has fallen from his home in the sky! Propelled by his jetpack, Flingy must swing around spheres to get back to his beloved Mrs Flingy - but he's clumsy and needs you to control his grapple! Can you help save Flingy?

With challenging physics-based action and lots of upwards speed, Flingy is unlike anything you've played before. Simply tap spheres to grapple to them and tap anywhere to disconnect. Use Flingy's momentum and his jetpack to shoot him higher and higher, but be sure not to lose your momentum or run out of fuel! 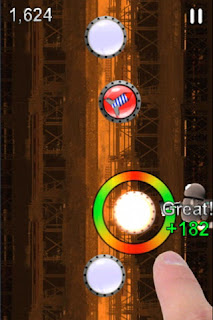 "We're very proud of Flingy and believe that this latest release delivers a number of great new features that users had been asking us for, enabling an even more addictive experience" said Paul Francis, Cogniflame CEO.

"Our aim is keep Flingy fresh, and by listening to the folks who'd played it we're confident we've been able to enhance what was already a great game even further!" added Dustin Williams, Founder and CTO of Cogniflame.

Pricing and Availability:
Designed for Apple's iPhone and iPod touch, Flingy 1.2 is only $0.99 USD (or equivalent amount in other currencies) and available worldwide exclusively through the App Store in the Games category.