Asian Applications Developer CDE Humble Gaming Limited today introduces iAsteroids 1.0, their new game for iPhone and iPod touch. The user plays the role of a space cadet who forms part of a response team that has been selected to save Earth from an unending barrage of Asteroids, Comets and Meteors. Players will have at their disposal a variety of weapons. iAsteroids is packed with explosive visuals, life-like space scenarios and the iPhone 4's superior graphics and signature Gyroscope function. 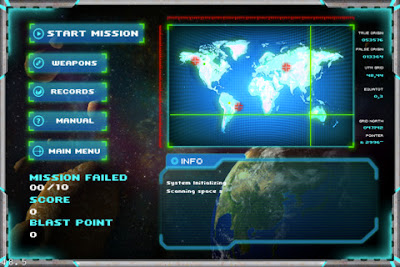 Hong Kong - CDE Humble Gaming Limited is pleased to announce the launch of their game iAsteroids for iPhone and iPod touch. The user plays the role of a space cadet who forms part of a response team that has been selected to save Earth from an unending barrage of Asteroids, Comets and Meteors. As the user crosses each level, the number, frequency and variety of space debris become more challenging.

Users will have at their disposal a variety (9 in Total) of weapons. They range from the less impacted "Laser" to the heavy duty "Nuclear Bomb". The user will have to progress through the game to unlock the weapons. "iAsteroids" detailed and easy to use UI and the unique Gyroscope feature gives the user the most realistic gameplay possible on a mobile device.

"Blowing up an Asteroid is for many older gamers the first memory they have of a video game. The feeling of nostalgia for the experienced gamer and the feeling of realism and adventure for the rest is the very reason we feel that iAsteroids will have a strong universal appeal." said Prakash Bharwani, Director of Communications for CDE Humble Gaming Limited.

Pricing and Availability:
iAsteroids 1.0 is $1.99 USD (or equivalent amount in other currencies) and available worldwide exclusively through the App Store in the Games category.


Based out of Asia, CDE Humble Gaming Limited is a Joint Venture between Celestial Digital Entertainment (CDE) and Humble Gaming Limited (HG). CDE offers over 30  games on the Apps store and is experienced in MMORG whilst HG offers over a dozen entertaining iPhone and iPod games developed by an international team of experienced game developers. Whether it's a line drawing, time management or strategy based games, the CDEHG team prides itself on its ability to combine original content with popular game playing genres and useful applications, whilst continuing to offer value for money.