UK based independent games developer Chris Mayer announces Brain App for Mac, an enhanced version of the popular and critically acclaimed iPhone/iPad brain trainer. Using tried and tested techniques, Brain App presents a variety of rapid-fire math problems in quick succession to exercise the brain. Brain App tracks progress and encourages users to improve day-by-day. A beta version is due around the end of November 2010, and anyone can sign up to participate in the beta program.


Chichester, UK - Independent games developer Chris Mayer has announced the impending release of Brain App for Mac. Users may also sign up for the beta program to get a sneak peek at Brain App later this month. The Mac version features all of the Brain Exercises from 'Brain App XL', the enhanced iPad edition of the game.

Over 17,500 iPhone, iPod touch and iPad users in more than 50 countries have given their brains a work-out with Brain App. Using tried and tested techniques, Brain App presents a variety of rapid-fire math problems in quick succession to exercise the brain.

A beta version will be available for download at the end of November, to receive the beta version users must sign up to the Brain App for Mac Beta Program. Sign up is free, and participating users will receive a free download of the full version prior to it's official release.

Four Brain Exercise types have been confirmed for the Mac release of Brain App.

* Speed Math (30sec and 60sec Modes)
Solve as many equations as possible with the time limit. Points are awarded for solving each equation, and deducted for a wrong answer. You can choose to play for either 30 or 60 seconds at a time. Easy / Advanced / Genius Modes.

* Balloon Burst
Burst the numbered balloons from lowest to highest. There are two difficulty settings, in Easy Mode a point is awarded for each set of balloons you burst in the correct order. In Advanced Mode points are deducted when you make a mistake. Beautiful photo backdrops enhance the experience in this new version.

* Card Count
Multiple playing cards are thrown onto the screen. Quickly total the value of the cards. It's not as easy as it sounds though - most are numbered, but Jacks, Queens and Kings will get you thinking fast to total their values.

* Missing Signs
Given only two numbers and an answer, you must figure out if the numbers have been added, subtracted or multiplied. A test of logic and math skills, answer as many correctly as you can within the time limit. Easy / Advanced / Genius Modes.

* Online World Rankings & BrainApp IQ
Introducing BrainApp IQ - a global score based on your results in all Brain Exercises. Take your BrainApp IQ online and compare with the world in World Rankings mode. Users of all three versions (iPhone, iPad & Mac) can complete in the same leaderboard. 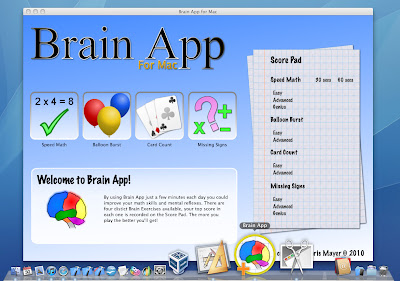 "Since Brain App's release in February 2010 the positive reviews have come flooding in, users love it and I'm thilled with all the positive feedback on the App Store. Review sites such as AppCourt are calling it one of their favourites. I look forward to bringing the Brain App experience to the Mac App Store, and adding more features in future versions on all formats" - developer, Chris Mayer

Pricing and Availability:
Brain App for Mac will be available for download from the Mac App Store in early 2011. The iPhone and iPad versions are available right now on the App Store, priced at $0.99 (iPhone) and $2.99 (iPad).


Chris Mayer is an independent developer based in Chichester, UK. Chris has developed apps in a number of categories, mostly focusing on games and entertainment titles.
Labels: mac, preview