Asian Applications Developer Humble Gaming Limited today announced that for limited period only, a special price reduction to its iPhone 4 app Aliens Need Brains. Aliens Need Brains features three difficulty levels making it a game for hard core gamers and beginners alike. The world is being attacked by different kinds of Aliens and the user operates as the last line of defense. With an array of cool weapons, blowing up aliens on an iPhone 4 is a very cool experience. 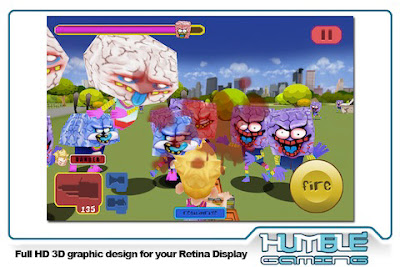 The world is being attacked by different kinds of Aliens (6 types) and the user operates as the last line of defense, with the location being Central Park. The aliens are here to steal human brains. With the use of an array (7 types) of cool weapons like "Can Launchers" and "Wave Cannons", blowing up aliens on an iPhone 4 is a very cool experience.

With multiple modes of gameplay and difficulty levels "Aliens need Brains" is a game for hard core gamers and beginners. The use of the "in game currency" allows users to buy or refill their arsenal of weapons.

Current Key Features of "Aliens Need Brains" include:
* "Save the innocent" feature. As you shoot down the aliens be careful not to shoot innocent humans in the process.(New)
* 2 Modes of Game Play
- Story Mode with Cut Scenes and mission objectives included (New)
- Unlimited Mode 3 levels of difficulty. How long can you survive?
* Leaderboards and Achievements maintained by Open Feint and Game Centre (for iOS 4.1 only) (New)
* 6 totally unique Aliens (including one anonymous Alien)
* 7 Unique Weapons at your disposal! Unleash them against the Aliens!
* The use of "in game currency" allowing users to buy or refill their arsenal of weapons.

Aliens Needs Brains makes full use of its Gyroscope feature, which enhances the users experience. We recently released V1.1 as well which has created different modes of game play including 'save the innocent'. We have reduced our price to US$0.99 cents for a while, so if you have not downloaded yet better hurry!" said Prakash Bharwani, Director of Communications for Humble Gaming Limited.

Pricing and Availability:
Aliens Need Brains is $0.99 USD (or equivalent amount in other currencies) and available worldwide exclusively through the App Store in the Games category.
Labels: iphone, ipod touch, shoot-em-up, special offers