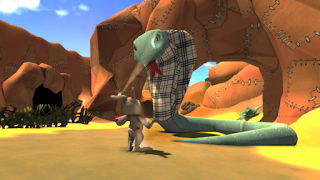 Woven is a beautiful little game combining a 3D environment that you would usually associate with open-world with point and click mechanics to make... I don’t know how you’d describe it, more or less a casual point and click adventure game with a hint of fairy tale.  It’s very family friendly and has very cute characters (although it seems that later in the game you will encounter not so cute characters too!), and has narrative in the form of rhyming couplets.
The pre-alpha I played doesn’t have an awful lot of content yet but what I did see was hugely promising.  The main characters (a stuffed toy elephant and a robot that was rejected and cast out by its factory) have names familiar from children’s TV series (not sure if this was intentional and hope it causes no legal issues, but it does give the game an immediate familiarity for young ones), and the game gives you ample help to understand the game mechanics as you explore.  Don’t get me wrong though – it’s not just for kids, it’s just that I immediately felt that this was a game I wanted to play along with my children, so that’s the main viewpoint I’m looking at it from.  There are plenty of mysteries to unravel as you explore the vast game world, in fact pretty much nothing is known at the outset of the game.

If you would like to help make the full Woven game a reality, please check out the Kickstarter page.