Written for www.indiegamenews.com by Shaun Aitcheson of Cloak and Dagger Games.

For the second year running I've had the pleasure of taking part in AdventureJam, a great game jam initiated by Cassie Benter and Stacy Davidson, where developers have two weeks to make an adventure game from scratch. With no conditions regarding story or theme the developer can literally make anything so long as it lives within the realm of an ‘adventure’ game. At the end of the jam we are then treated to a huge variety of lovely little adventure games to play, which can be voted on to determine overall and category winners.

My entry last year, Pendek, did pretty well, coming in 6th overall out of 80-odd entries. Creating Pendek was a big challenge and definitely squeezed all my energy and time for the full two weeks, but I was happy with the end result.  Since then, my pal Troels Pleimert and I had been discussing the possibility of swapping photos with each other, which we would then use as the basis to create our own games using the photographs we receive as backgrounds. We initially planned to do this quite some time ago, with a view to creating a jam revolving around the premise of swapping photographs. Troels suggested using our idea for AdventureJam2016, which after my initial reaction of “AHHHH I HAVE NO TIME FOR THIS!”, we ended up doing! On the eve of the jam we swapped photos – I sent Troels some photographs taken at Nunhead cemetery, just around the corner from where I live in London. It’s a huge wooded cemetery and features a ruined church and old gothic gravestones – a lovely point and click location ripe for mystery! Troels sent me a huge set of photos taken in and around his town of Roskilde in Denmark, which also included pictures taken in his local cemetery. A very interesting result of our little experiment was the amount of overlap in our games, in term of locations and themes! 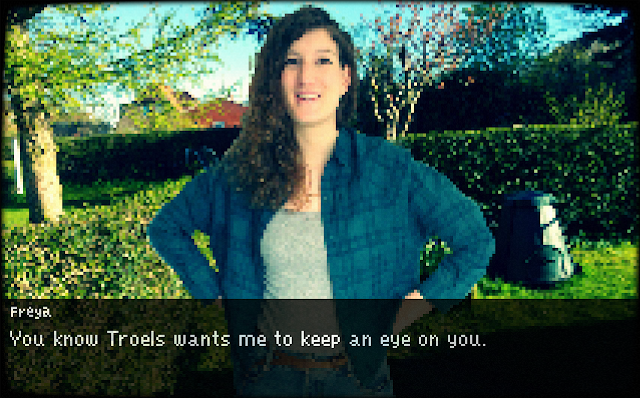 I ended up using these photos as the basis for my game ‘aerinde’, which is Danish for ‘errand’. I was going to call it ‘Errand’ but remembered there was a little adventure game made a few years back with this title. It’s a short first person point and click revolving around a down and out fellow called G, who lives in Roskilde. He is called upon by an old friend to return a favour… and I can’t say too much else about it! It’s a pretty short game and any real story explanation would spoil any surprises you might get by playing the game. Knowing from Pendek that creating a traditional third-person adventure game would be very demanding in such a short time frame, I chose to go with the first person Myst-style look, which meant that the graphics were and scenes were quick and easy to set up. Troels supplied me with some cool and varied photos which definitely helped a lot too. I came up with the story sitting in a park with my wife (who plays Freya in the game) and the actual programming was done over 4 or 5 nights using Adventure Game Studio. One thing I didn’t like about Pendek was how the protagonist, Yandi, randomly spouts out story exposition along the way of the game, especially at the beginning, to explain the back-story and set things up. I wanted to avoid this for the game jam, and I hope I succeeded! The back-story can be uncovered by reading texts on your phone and other documents. This was inspired by recently playing games like Gone Home – which if you haven’t played, do so as soon as you can! Wow, what a great game that was. I’m reasonably happy with ‘aerinde’, considering the limitations of time and fitting a story around a predetermined set of photos. You can download the game and see more info here. Be warned, there’s adult themes and some bad language along the way.

I really recommend checking out Troels’ game, ‘Were We Ever?’. It’s a very well written narrative of a couple who arrive at a cemetery, to visit the grave of one of their mothers. The story unfolds in a rather lovely yet shocking and surprising way, and I was truly drawn into the game immediately, it’s easily one of my favourites from the whole jam. Again, I can’t give too much away about the story as I don’t want to spoil anything, but do play it! You can also check out a video Troels made showing footage of his game, aerinde, and another game he was involved with, Stair Quest. Stair Quest is a deliciously masochistic exercise in text parser early-Sierra stair climbing skulduggery, and is a must play! 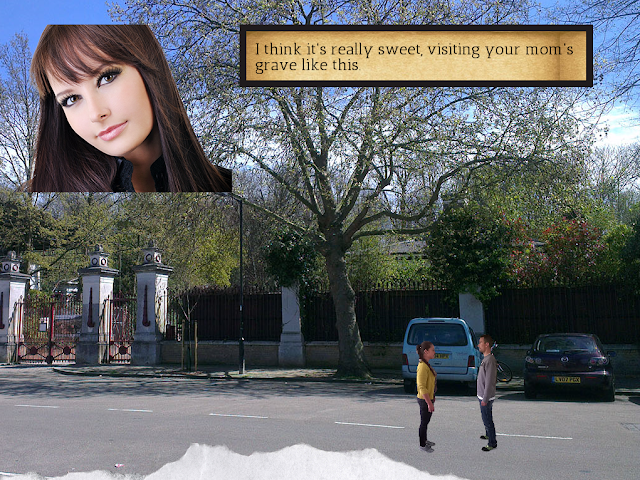