Himeki Games launches Greenlight campaign for An Oath to the Stars

UK, London, Mar 07, 2016 — Himeki Games, an independent game studio based in London, has submitted to Steam Greenlight An Oath to the Stars, a hardcore Danmaku SHMUP inspired by Japanese classics such as Ikaruga, Eschatos and Dodonpachi, with anime characters and a very peculiar art style.

"An Oath to the Stars is the game we always wanted to make, a love letter to the genre with a new twist," says Attilio, experienced game developer with more than 6 years of experience, and continues: "We want to give a pure experience, without elements such as powerups and upgrades which only distracts from the main core, which is dodging and scoring. We always loved SHMUPs, we are targeting fellow fans and we are not compromising on gameplay and quality to appeal to the mass market." 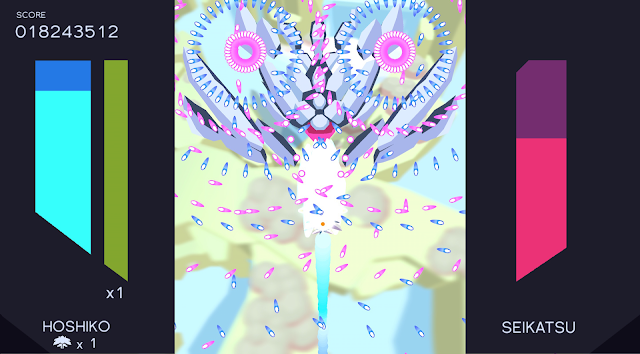 The core mechanic of the game is the Distance Overdrive. Your laser damage power is inversely proportional to the distance from the target. Getting closer will grant faster kills, but put you in danger. Faster kills will then impact your momentum combo, multiplying your score if you can keep your streak of fast, close kills without dying. In order to use your laser, you'll consume laser energy, which is released by enemies. Faster kills also grants additional laser energy, resulting in even longer combos.

The game follows the story of Hoshiko, former general and mecha pilot. Left for dead by her closest friend and comrade, she is now looking for revenge. "Hoshiko is a strong character, and the only thing left for her is to get revenge from Chiyoko," adds Antonio La Barbera, Character Designer of the game.

Himeki Games was founded by Attilio Carotenuto in 2015 in London. Attilio previously worked at Electronic Arts Playfish and King, among others.