Adventure-X, hosted by Screen7, is now in its fourth year although this is only the second I've attended.  In 2012 I made the, in retrospect, entirely stupid decision of trying to showcase 5 different games in progress in a single half-hour slot.  Still, lesson learnt, this year I presented 3 games with a half-hour slot for each one.  It is, as far as I know, the UK's only exhibition dedicated to adventure gaming and interactive fiction.

The venue had moved this year to the South Bank University in London, only a very short walk from the Elephant and Castle tube station.  We were. appropriately enough, in the "Technopark", and it turned out to be a pretty good venue.  There were talks, panels, demonstrations and exhibitors in different zones, although as it turned out I didn't actually get to any of the talks or panels at all,

As you might expect, there was a large presence of AGS forum members there, quite a number of whom had flown in from mainland Europe to be at the event (some may have travelled from even further, I'm not quite sure).    It's hard to know how many people attended in total - I'm sure Mark will publish the figure when it's known - sometimes it felt like there were very few there but then a talk would end and suddenly a mass of people appeared.  The demonstrations weren't very well attended unfortunately although AdventureTreff did record most of them (sadly one of the very few they didn't was Captain Disaster in Death Has a Million Stomping Boots, which I felt was far and away the best of the three presentations I did). 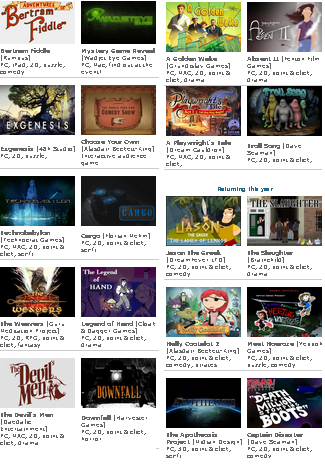 Whilst there was a heavy developer presence, it was clear from talking to a couple of people - and overhearing one or two conversations :-D - that there were some visitors who were clearly purely gamers.  I don't know about anyone else but I'd be more than happy if we had the same venue next year.

I'm going to post about each game I saw either demoed or exhibited separately, but just one quick note about the games - I never knew there were quite so many art styles around!!  Every game I saw seemed to have a completely unique art style.  The level of creativity shown by the numerous indie developers at the event was truly impressive (not just the graphics, obviously).

If anyone's interested in adventure games and / or interactive fiction, I would definitely recommend that you try to attend next year.  Until then... I've got quite a few games to write up!