I interviewed James Sayer of Dingo Games, who has recently released Tasty Blue, a game where you are a fish (then a dolphin, then a shark – a nanoshark!) that eats … well, everything.

I was really into Miles Davis at the time, and had just watched his movie "Dingo". That was where the name came from. It's easy to spell, sounds kind of fun, and the domain name was available. The only downside was that we're Canadian, and Dingos are pretty uniquely Australian. So I feel bad about stealing their countries dog.

Actually, our second choice for a company name was very Canadian - it was "Kermode Games". The kermode bear is a type of white coloured black bear that only lives on the west coast of Canada, where we're from. But "kermode" is hard to spell and nobody knows what it is.

2/        Tasty Planet and its sequels have pretty much created the “Eat-‘Em-Up” genre – when / how did you first get the idea?  Were you playing Snake / Nibbles one day and thought “hey you know what, we could take this idea about getting bigger when you eat stuff, but turn it into a good thing!”?

Well, we can't take credit for the "Eat-'Em-Up" genre. As far as I know, the original eat-em-up was an old Intellivision game called "Shark Shark!". I had played that when I was really young. The other popular games in the genre were Feeding Frenzy and Katamari Damacy. With Tasty Planet we tried to take the idea to it's extremes, going from the smallest things in the universe to the biggest things.


3/        How did Tasty Blue come about?  Were you just keen to do another Tasty game but wanted to do something different to your previous games?

After Tasty Planet: Back for Seconds, we didn't have a definite direction on where to take the series - I mean, there are always other themes to explore, different locations to go to and different things to eat... But we wanted a bigger change than that. Part of the idea was that the original eat-em-up Shark Shark! was in the ocean, so it seemed cool to take that idea and expand upon it. I'm also an avid scuba diver, so it was fun to work on something related to that.

4/        My three and a half year old daughter loves playing Tasty Blue – do you get any younger members of your family to help play-test your games?

We have some nieces and nephews of a similar age that are really into our games. I don't think we've ever used them for playtesting before release. Actually, I watched them play Tasty Blue recently and I felt bad because they kept getting stuck navigating the menus (because they can't read the text on the buttons). So maybe I should have playtested on them!


5/        In Tasty Blue (and indeed your previous Tasty Planet games) we encounter many life forms of various shapes and sizes.  Did you have to do a lot of research into the relative size of different creatures, their habits and the way they move, in order to incorporate those details into the game?  (Love the way some of the fish go and hide in the sea anemones btw!)

On Tasty Blue, we brain stormed a bunch of different possible entities to include. We tried to include things that are recognizable, interesting to look at, and have potentially interesting behaviours. We put them in a big spreadsheet that included data about their size and region of the world that they would be found in. The sizes of entities is really important in the Tasty Planet games - we need to have a continuous chain of entities to eat as you grow bigger and bigger. So we sorted the spreadsheet by size, and filled any gaps where we didn't have enough entities to eat. As we made levels, we would often come up with new entities that were needed to fill in gaps in the gameplay. We did a lot of research on the sizes of things, what they eat, where they live. We try to include some realistic behaviours, but a lot of the stuff in the game is silly, so we don't worry too much about getting everything right. I mean, we have penguins and polar bears living together! (Although the story tries to justify that).

Deciding how realistic to make things is often challenging... we sometimes disagree on how far from reality we can stray. In Tasty Planet: Back For Seconds, there is a series of dinosaur-era levels. I was content with calling it the "Dinosaur time period" and including anything that resembled a dinosaur. My artist is really into dinosaurs so she wanted to limit it to a more specific time period, like "Late Cretaceous" and then also limit it to a specific geographic region. We ended up with a compromise, but going too far down the "realistic" path can be very time consuming and constraining.

6/        Are you actually managing to earn a living from making games, or is it more of a hobby?  (If the latter… do you want to try to make it into your day job?)

Yes, we earn our living making games. I started making games when I was in university about 10 years ago... I was making a bit of money doing it, so I went full time after finishing school. I've never actually had a "real job"!


7/        How long did it take to make Tasty Blue, from initial concept to final release?

It was probably 2.5 years. Though we worked a lot on other projects during this time as well (like Clumsy Cat). It took us way longer than we thought it would. But that is part of game development!

We have tons of ideas for Tasty Planet, but we're excited to be working on other projects right now. I don't think we'll do another Tasty Planet game for some time. When VR takes off maybe we'll do Tasty Oculus.


9/        How do you see the indie game scene atm?  With the market getting more and more saturated, how can developers make their games stand out?

I agree with the general sentiment that things are getting more and more crowded. I've been in it for over 10 years, and every year it gets harder to stand out. Our plan right now is to make extremely unique games. Don't go where everyone else is going, you'll never get noticed. 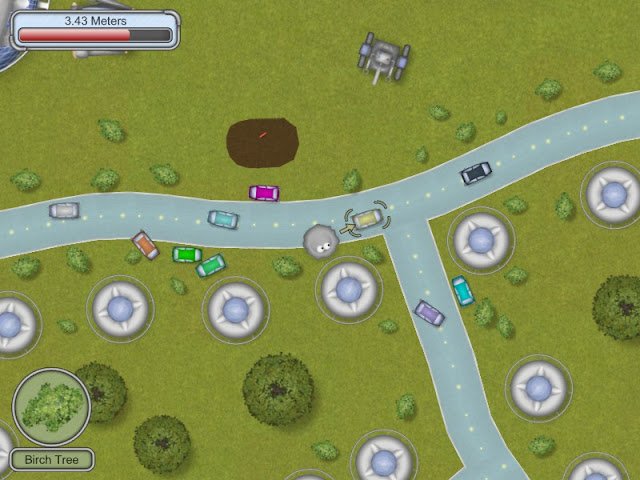 10/     Are there any other developers whose work you particularly admire?

Jonathan Blow - Braid is still one of my favourite game experiences ever, and I'm excited to try The Witness. Subset Games - FTL was unique, really well designed, and super fun.


11/      If you could give aspiring indie game developers one piece of advice, what would it be?

Do it because you love doing it. Don't quit your dayjob. The tools have never been easier to use, so if you want to make a game, go ahead and do it!