It’s a fish eat fish world out there.  Well, technically, in Dingo Game’s follow up to Tasty Planet, it’s a fish eat anything world.  Anything, that is, if it’s smaller than the fish.  Welcome to the world of Tasty Blue.

The game starts with a comic book style introduction (and we get a few more of these later in the game).  A young boy buys a goldfish, but is advised not to overfeed it.  Of course, he does, and the more the fish eats, the bigger it gets.  Soon (in level one) it can jump out of the goldfish bowl, down the drain and out into the open sea. 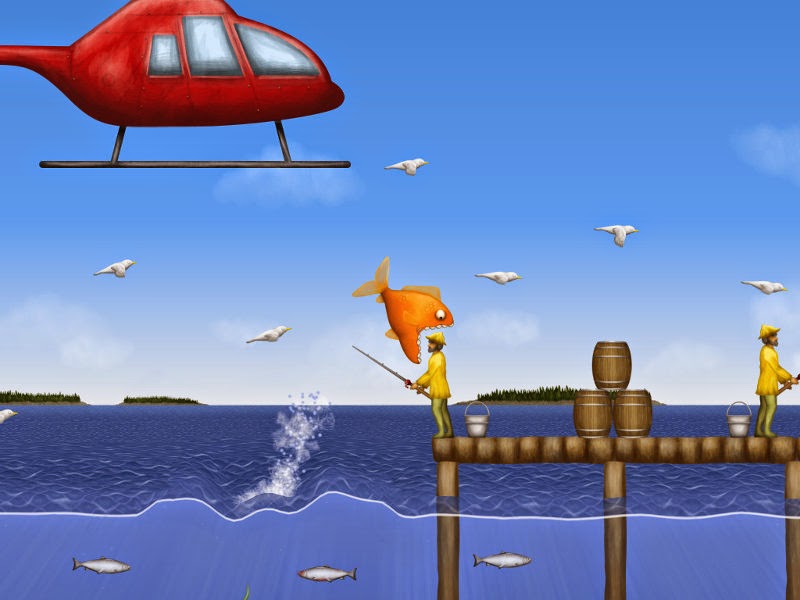 Each level is essentially the same, although there are some differences to them which I’ll touch on later.  Basically, you start out small.  You eat tiny stuff, you get bigger, you eat slightly bigger stuff, eventually you become enormous.  After 20 or so levels you recap your whole journey, right from the goldfish bowl to being able to swallow cruise liners and lighthouses.

The goldfish becomes big news, and a dolphin performing tricks for the public hears about it – and thinks this might be a good idea, so it also starts eating everything in sight and soon escapes from the sea life centre.  It also becomes huge and again, after 20 levels or so, you recap the entire experience from jumping through hoops to jumping out of the water and eating military aircraft. 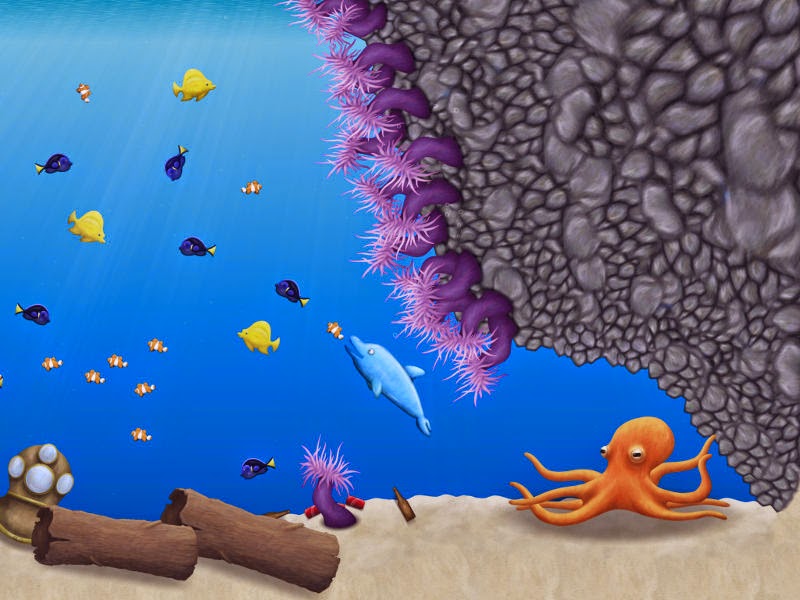 The world is in peril!  So what can we do?  We call in… nanoshark.  This little critter starts off so small that it can only eat zooplankton, but it grows very quickly.  It eventually takes out both the goldfish and dolphin, but… yup, you guessed it, the eating doesn’t stop there. 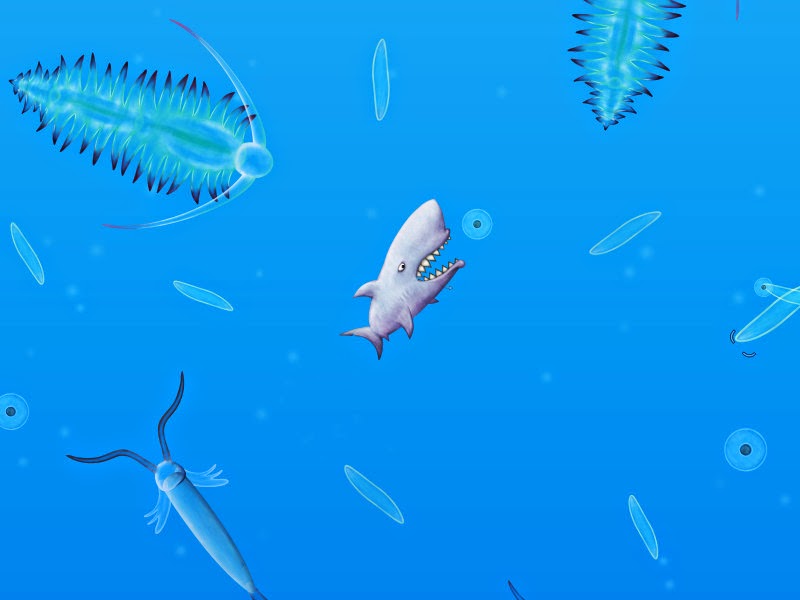 The levels vary quick widely in time to complete, ranging from just 20 seconds or so to about 8 minutes.  The game is very casual in nature and on default settings (though you can make it more difficult if you want), actually completing the levels isn’t likely to be much of a challenge to you, although that doesn’t mean it isn’t enjoyable.  There are 3 star ratings for each level according to how quickly you complete them, and getting 3 stars on every level is a reasonable challenge.  Once you complete the final level some bonus levels become available, and some of these are much more challenging (one based on PacMan where you immediately lose if any of the sharks touch you is particularly challenging).

There is also a 2-player mode, which is basically the same again but for 2 players.  One player takes the role of the goldfish and the other the dolphin; I have yet to ascertain whether the later levels are different to the 1-player game (where you control the nano-shark and eventually have to eat both goldfish and dolphin).  [EDIT - after playing this game 2-player with my daughter, who loves the game, MANY times, I can confirm that there is no difference to the levels, only in which creatures the players control - goldfish, dolphin, or nano-shark.)

In some levels the bigger creatures can harm you (although they only make you shrink slightly, you can’t actually die – at least I don’t think you can!), in others you might need to make your fish / dolphin / shark jump out of the water into the air (always fun!), some have you sliding down icy slopes, there are even a few basic physic puzzle elements in later levels.  In some levels the only food you can eat is pearls from oysters, but you have to be quick or they'll snap shut on you... you get the idea.

The game rarely suffers from feeling too samey because, every time it starts to feel a little too similar, something different pops up in the next level.  Though it could perhaps use just a touch more variety, the changes in levels are nicely paced. 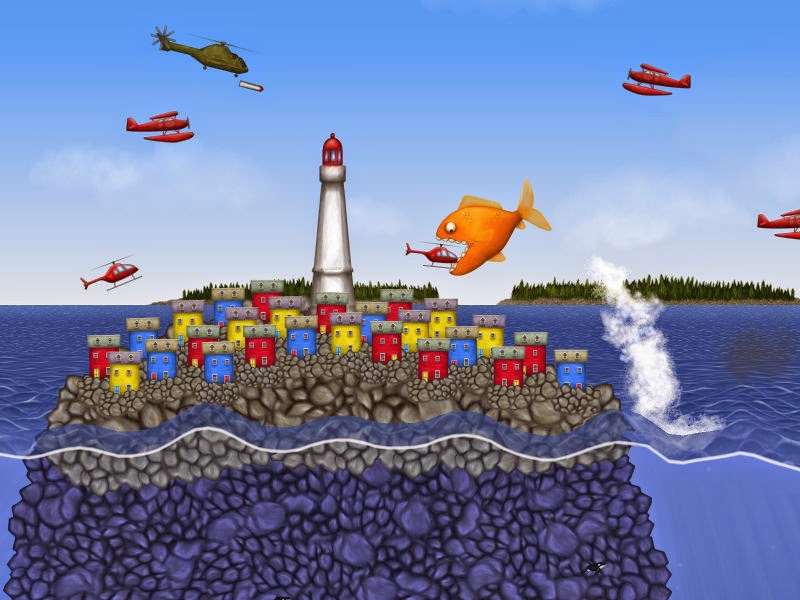 It’s a very easy game to pick up and play, reasonably responsive with the keyboard, naturally much more so with the mouse.  My three and a half year old likes this game and can mostly play it with minimal assistance, and also likes playing it as a two-player game – though I would think generally a six year old upwards would have a much better grasp of the game (which is of course to be expected!).

The graphics are nice, cartoony, pleasantly detailed but not fussy, and the animation is smooth.  The sound effects are fine, the music is good though perhaps it could have done with a couple of extra tracks to add more variety.  It’s all very nicely done and the cartoon strip cut scenes are well drawn. 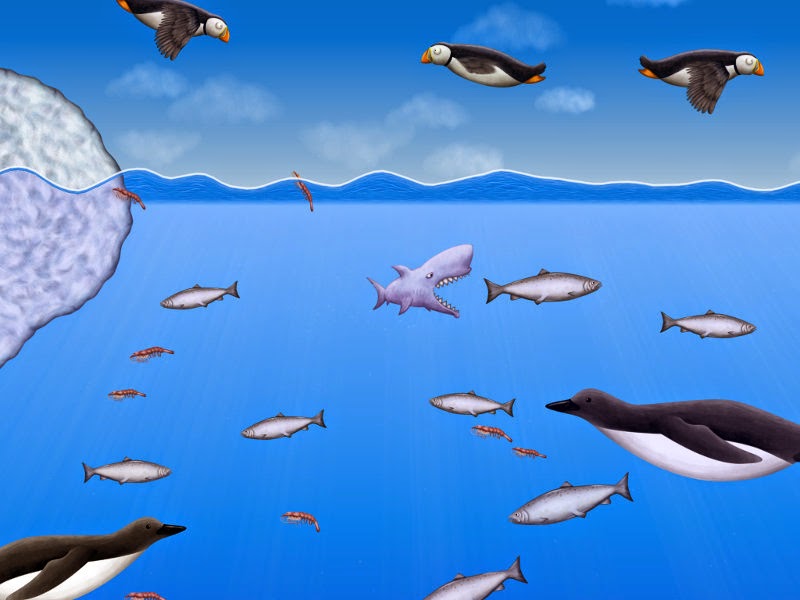 If you like casual games that are enjoyable and entertaining, but not particularly difficult, then I think you’ll really enjoy Tasty Blue. If you enjoyed Tasty Planet: Back for Seconds, you will definitely enjoy this too – it has the same basic gameplay, but with enough added features to make it more interesting.  If on the other hand you demand all your games to give you a hardcore challenge, then this really isn’t one for you.