Bezircle is a cross between arcade and real-time strategy game, all wrapped up with a one-touch interface.  This is quite some feat to achieve, but indie devs Ludomotion have pulled it off admirably. 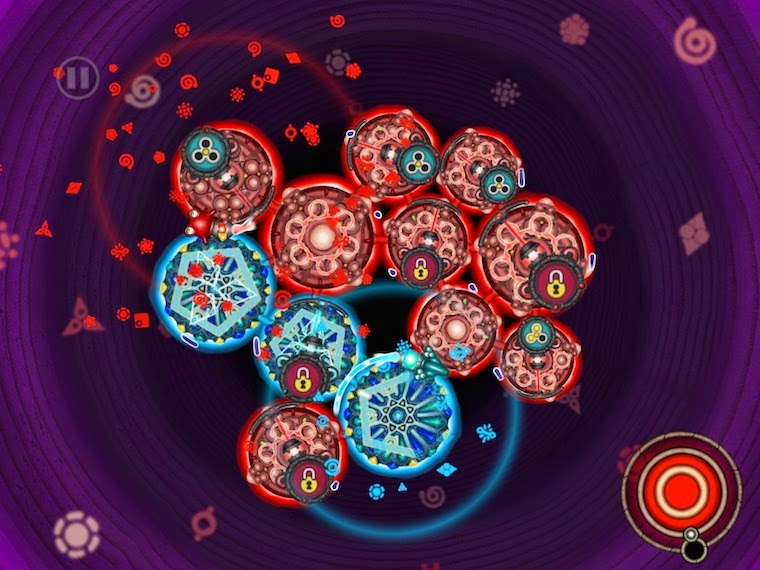 It's all about capturing circles, you see.  You can only capture one that's next to one that's already yours, and moving about the game area quickly is quite a feat of manual dexterity at times - to me this is probably the game's only major failing, it sometimes feels just too tricky to move exactly when and where you want to.  To capture circles you need energy, which sometimes means harvesting power lava off the circles.  There are power-ups to be obtained, explosions to be caused, and that sort of thing.  Then of course you sometimes have one or more enemies to overcome...

Each of the 7 Acts is broken up into stages, and as well as simply completing stages to progress, there are 3 challenges to complete for each one if you can.  In addition to an arena mode, this game is deceptively simple - there's a reasonable depth of strategy going on here but you also have to be quick.  There are a nice number of levels overall and a fair amount of replay value.  The stages themselves offer a good variety of gameplay challenges.  The graphics are very nicely done and the sound / music is also good, although a bit too repetitive.

Overall, Bezircle is a satisfying arcade / RTS combo that will give both your brain and reflexes a very decent challenge.  The free part of the game you can try before buying is enough to give you a good idea of whether you'll want to go ahead and purchase the full thing.

More about Bezircle for Android