Meet Gaius James Rover, never to become a famous clown as he promised his father but soon to become a swashbuckling pirate... well, about as swashbuckling and heroic as a certain Guybrush Threepwood.  Like Guybrush, Jolly Rover will have to solve devious puzzles to save the day, get the girl and complete the game.

Jolly Rover is a traditional 2D adventure that has a great many nods towards the Secret of Monkey Island series, particularly the first game - pirates of course, cannibals, clowns, ghosts, treasure beyond imagination and lots of unusual uses for everyday / bizarre items (no rubber chicken with a pulley in it though).  It's a great little game in its own right though, sporting everything that a good adventure game should have - a likable but faintly ridiculous main character, an ensemble cast of scurvy seadogs, etc.  Gaius is working a trade route when captured by pirates - his first job is to escape, with useful objects everywhere - none of which he can actually pick up. 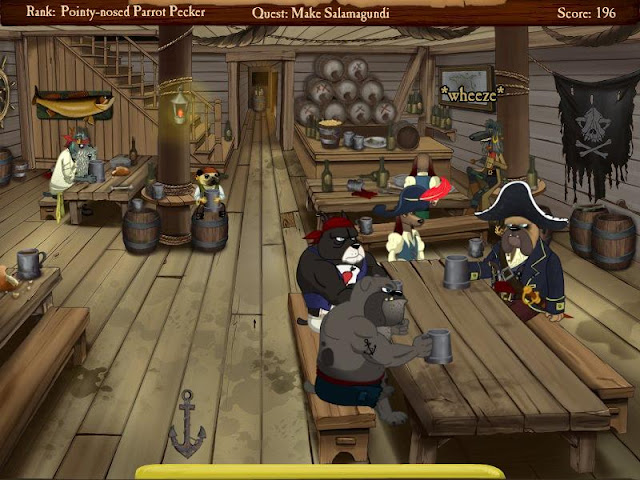 I should mention in case you didn't already know that the entire cast of Jolly Rover are salty seadogs in a very real sense - they're all dogs.  Elsewhere I described this game as being Monkey Island mixed with Dogtanian, and I stand by that description - the astonishing thing is that it works so well.  The characters are engaging and interesting; you barely even notice as they walk along the screen that they have tails!  However this isn't merely an aesthetic point, the canine theme is used in the dialogue to humorous effect too.  The plot has a bit of intrigue in it, there aren't really many surprises but it's well developed and paced nicely.

The game looks great, with lovingly created graphics and detailed animation.  The voice acting and music are terrific; just in odd places the voice acting doesn't quite sound right, but the problem areas are rare. The interface is a dream to use - a single cursor for all actions, a la Broken Sword, with a blue cursor indicating that you haven't tried that particular action yet.  You can also show all hotspot areas by pressing the space bar.  It's one of the best interfaces I've seen in any adventure game (and I must have played a few hundred by now!). 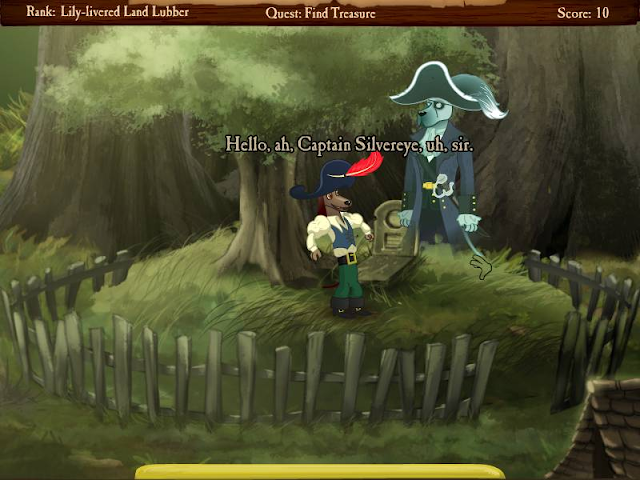 The puzzles are perhaps a tad on the easy side, though there are a few definite head-scratching moments (including the quite ingenious way of escaping being marooned on a remote island).  If you do get stuck, feeding crackers to a parrot you meet early on can give you some hints.  This hint system is a nice feature and it makes it feel more like part of the game itself instead of cheating, while the hints themselves are useful but cryptic enough to be not simply giving you the answer.  There are other things you can collect in the game - more crackers for the parrot, pieces of eight, and flag remnant - which add a little extra interest to the game for those who aren't already adventure game addicts.

You also get awards and concept art / commentary etc unlockables for achieving certain things.  These things all put together help to give the game a little more replay value than most adventure games, which helps to offset the shortness of the game somewhat (I completed it in 4 hours, but didn't manage to do everything you could possibly do in the game).

Overall, Jolly Rover is a beautifully made game and has humour aplenty.  (Your current quest and rank are always displayed at the top, which are often funny to read.)  It's got just about everything you could wish for in an adventure game and a few extra bits as well; the only area it really falls down is in the length.  You don't need to be an adventure game fan particularly to enjoy this game - nor do you need to have played The Secret of Monkey Island before, though there are a lot of in-jokes that you'll miss out on if you haven't.   It's an extremely well made adventure game that captures the spirit of the classic point and clicks while being more accessible to casual gamers.