March 18, 2014 - Rome, Italy: The IndieGala Doorways bundle by Indiegala is available now. This new bundle sees customers paying as little as $1 for an incredible collection of games and, with IndieGala, customers not only decide how much they want to pay, but also how much of the proceeds go to the Able Gamer charity.

The IndieGala Doorways bundle consists of AirBuccaneers, Oknytt and Unhack. Choose to pay as little as $1, or pay over $3.49 for the bundle in the first 24 hours to unlock Doorways: Chapter 1 & 2, Fester Mudd: Curse Of The Gold, Huntsman: The Orphanage, Not The Robots and Postmortem: One Must Die.

AirBuccaneers - Welcome to the ancient North, once the cradle of culture and peace, but is now corrupted by magic and inhabited by nasty bandits sowing destruction in airships. Choose to be a vicious Buccaneer or an infamous Viking and take a glider to the skies. Your goal is to drop enemy vessels and secure dominance of the ancient North.

Oknytt - A point-and-click adventure game where the player takes the role of a small, seemingly insignificant creature, leading it through a dark world riddled with obstacles to help it find a place to belong. The game takes place in a Norse medieval world and contains a number of beings and areas inspired by Swedish folklore.

Unhack - A visual novel and puzzle title featuring a story of greed and self acceptance. Navigate mazes and destroy viruses alongside fully voiced AI companions! Uncover the culprit behind the 5K Worm over this ten episode tale.

Doorways: Chapter 1 & 2 - Doorways is an episodic survival horror game, featuring a complex story and deep atmosphere. Each chapter will challenge you with its fast-paced gameplay and breathtaking visuals and sounds, so prepare to immerse yourself in a terrifying psychological experience.

Fester Mudd: Curse Of The Gold - Set in Wild West, a three-part comic saga of exploration, reunion, and redemption...and a love letter to the classic adventure games of the 90s! Roused from a life of sloth to reunite with his long-lost brother in search of unimaginable riches, reluctant hero Fester Mudd somehow manages to be intrepid... 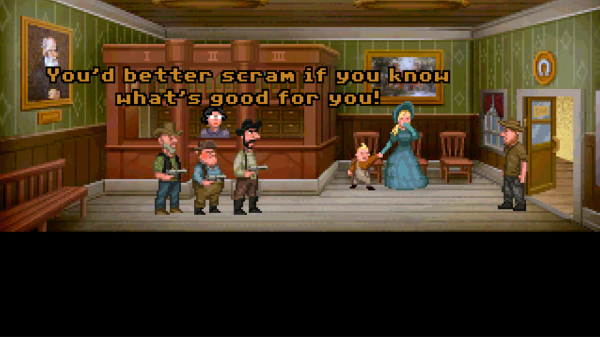 Huntsman: The Orphanage - Take a deep breath, dim the lights, put on your headphones... Non-linear first-person gameplay lets you explore Grimhaven Orphanage and discover the characters who once lived there. Voiced by Dan Bull, Chuck Huber and Raychul.

Not The Robots - You are a robot in an office building. You have to eat furniture and not get caught. A mysterious story unfolds. Not The Robots is this yearís most exciting Roguelike Stealth Furniture Eating Simulator. Itís a game with random levels, permadeath, and the goal of eating furniture. Same furniture is also your stealth cover.

Postmortem: One Must Die - Narrative-adventure playing an Agent of Death who must take ONE life that could change the fate of a conflict-torn Nation! Think The Walking Dead meets Home and The Last Express, with a dash of To The Moon! Freeform exploration with Rich dialogue What might you learn searching the fundraising Gala and talking to patrons?