Avadon 2: The Corruption is a traditional fantasy RPG wrapped in a nice friendly user interface.  Many games are tagged “Epic” in some way or another, but when it comes to the storyline, few games really deserve the title – Avadon 2, however, is one such game.  The game world is huge, the characters you meet are interesting, the plot intricate and the consequences of your actions far-reaching.  Apart from the fact that you end up serving Avalon again (as a “Hand of Avadon”), I won’t go into too much detail in terms of the story itself, because that might spoil your exploration of the game. 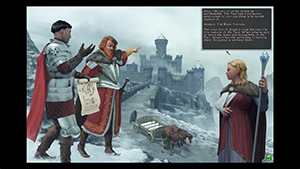 In fact, those two words – story and exploration – really sum up what Avadon 2 – and indeed all of Spiderweb Software’s games – is all about.  The game has a very detailed story – there is a lot of reading involved, which may put off some, but it’s easy to see when something is directly related to the main storyline or not if you don’t want to read everything – and the game really rewards players who are willing to spend time exploring the game world.  The game is reasonably challenging even on “Casual” level, and only the most hardened RPG veterans are going to try the “Torment” level, but the game tends to gently lead you (rather than force you) into the areas that you are able to cope with at your current level.  I was a little disappointed that the levels are capped at 30 – for some reason it felt to me as though it should have been 50 – but the skill sets and levelling system are sufficiently interesting to engage the player. 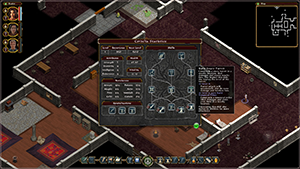 You have one main character, and you are joined by up to two others, having to reselect (from a choice of 6) each time you leave Avadon.  Some quests require particular team members, and each individual character has their own side quest which you can follow or ignore.  Whether you help each character and what decisions you make during the quest should you take it will have an effect right at the end of the game (basically, the more help you might want at the end if you want to try to seize power yourself, the more you should help your fellow Hands of Avadon!).  The main quest follows a storyline that is continued from the first Avadon game (mainly involving the betrayal by Heart Miranda), but the back story is all available via dialogues if you’ve never played the first game, and in any case isn’t particularly essential to actually playing this one – it mostly involved.

There are the usual weapons, bits of armour, amulets and so forth to upgrade your character in addition to levelling up, as well as spells, special abilities and so forth.  It’s all nicely integrated into the game, and since enemies don’t respawn, the fact that you can sometimes avoid them and also the game’s emphasis on exploration, grinding up the levels is rarely a prerequisite – the grid-based, turn-based combat is more reliant on effective strategy than simply being tough.  I’m always a little annoyed with the shop’s in Spiderweb’s games – they only give you 10% of the value of what you sell, which is a bit mean – but that’s maybe just a personal thing.

The aesthetics are okay – the graphics are nothing special but they do the job and are quite varied.  The sound effects add atmosphere, there’s some great music for the intro but unfortunately none in-game.  The aesthetic approach is therefore quite minimalist, but that fits rather well with the text-oriented approach.  All in all, Avadon 2: The Corruption has a very pleasing old school approach, but with a much nicer UI than a lot of those old RPGs had.  Thoroughly recommended to those who like traditional RPGs and won’t be put of by the plentiful reading that’s needed to keep up with the storyline.

The trailer below gives you a nice look at the game mechanics and style of the game, and you can hear some of that intro music.  The game is to some extent what you make it - will you be loyal to Avadon, join the rebellion, work for the Tawpn Empire, or just choose your own path, take on dragons or be more cautious and try to keep out of trouble when possible?  There are lots of choices to make, and they all have an effect (even if you may not realise this until the game's prologue when you find out what happens after the events in the game itself.)

Find out more and buy the game from the Official Website.