AstroLoco: Worst Contact by Hungry Planet Games is a somewhat short but highly enjoyable comedy sci-fi adventure game (a genre you can never had too many releases in!).   You swap between two characters – Ronald, a long-suffering mechanic on a space station, and Arianne, a train driver – as you take on an evil plot by a rival company and save the hopeless CEO of the company you work for.

Yes, you read that right – train driver.  You see, in this game world people travel through space on gigantic trains.  The  game features a simple 2-click interface which works just fine (although to me right-click for Look left-click for Interact always seems more intuitive than the other way round!), and there are a nice variety of puzzles to be solved.  Although this game is pretty easy, the amount of humour including some laugh-out-loud moments makes it suitable for more experienced players as well as beginners – although this game has clearly been designed to appeal to both the casual and adventure game markets rather than adventure game purists.  There is a short tutorial at the beginning of the game which seasoned adventurers won’t need, but again it’s done with enough humour that you won’t mind going through it at all. 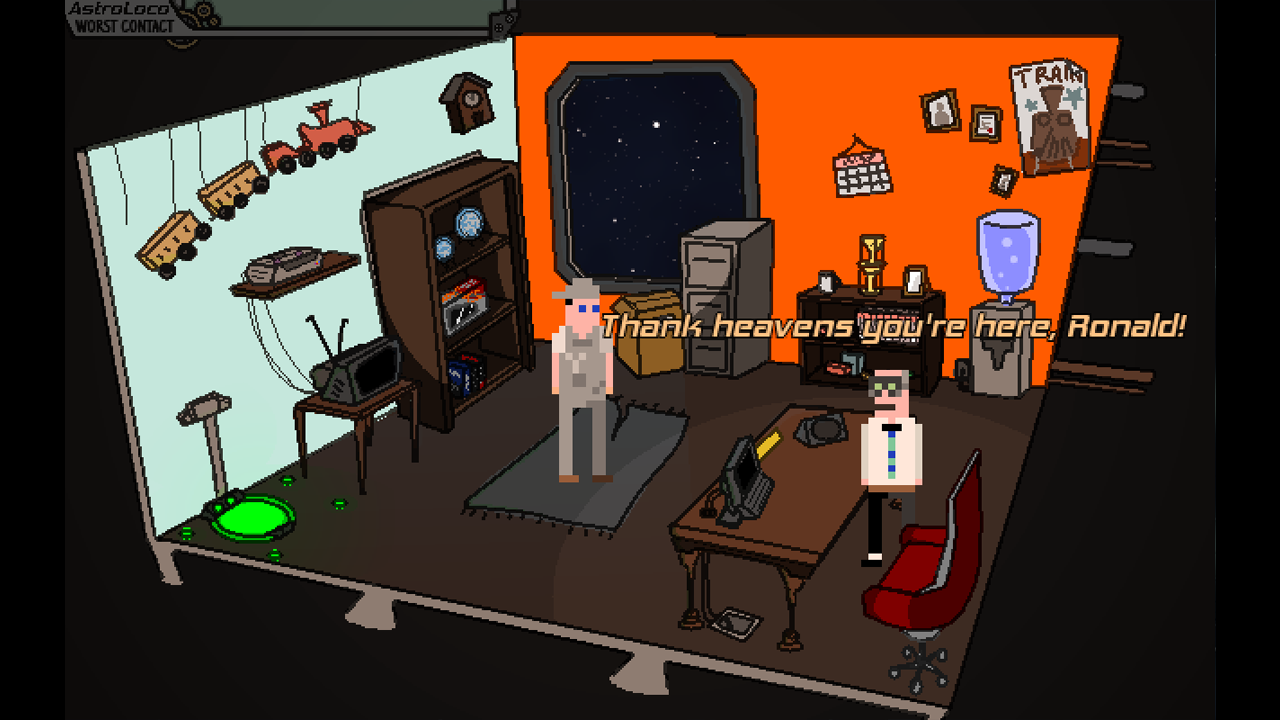 Despite the relative easiness of the game there are one or two puzzles that will take you a bit of figuring out, and you can always replay it to get all the achievements (not sure if it’s actually impossible to get all of them in your first play-through, but it’s definitely highly improbable).  There is also a Director’s Commentary, which I would only advise turning on if you have already played through the game once as it does contain some spoilers.  The commentary is in a nice way in that you click on the icon for commentary on that particular item / scene – it doesn’t force itself on you while you’re playing it.]

The plot is fun and while it doesn’t really contain any major surprises, the characters are funny and the events in the game logical (according to the twisted logic of the game of course!) and things move forward at a nice pace.  There are multiple references to adventure games and science fiction series of course, so if you’re a fan of both science fiction and adventure games, you’ll get all of the jokes.  It doesn’t matter if you’re not a fan of one or even both genres however, as the game is just funny in its own right.

The graphics are a curious mix – simple but nicely drawn cartoony backgrounds, and very blocky main characters.  I’m not entirely about this device to be honest but it does give the game a distinct look (one that was initially developed in David and Murray’s earlier games – more on that later) – it gave me the impression that a 16-bit game had been invaded by sprites from the Atari 2600!  Still, despite the lack of detail each person you meet in the game has character, and there are some nice animations in there.  This is all back up by good voice acting (I especially loved the cheesy narrator’s voice) and I really loved the music in AstroLoco – it just seemed to fit the game absolutely perfectly. 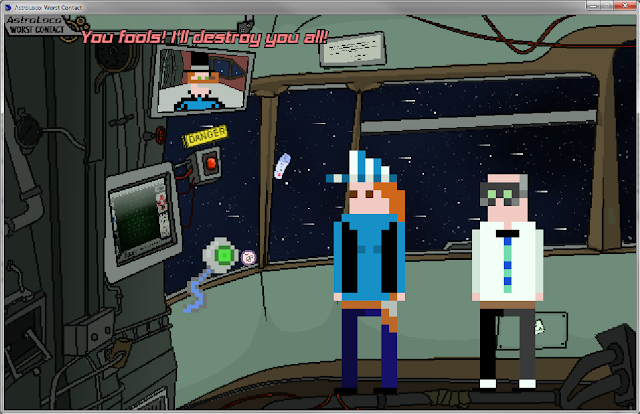 The game features a utility belt for each player, but no viewable inventory – if you’re carrying an item, different things might happen when you try to interact with objects.  This isn’t really a method I’m that keen on for two reasons – you can actually solve puzzles without even realising you’ve done it, if you happen to try something when you’re holding a certain object you might have forgotten about, and I tended to forget what I’d picked up.  This would have been quite a major problem I think with a bigger game, but as it was the game is divided into bite-size chunks and can be completed in about 3 hours, so this didn’t become much of an issue.  There was probably a way to view what you were carrying somewhere – I guess the fact that I never needed to find out shows how small an issue this was in the game!   There were several mini-games, only one of which seemed quite difficult to complete fully (although you only had to partially complete it to actually progress in the game).

Overall, AstroLoco: Worst Contact is a highly enjoyable game, very funny, and whilst short has probably more replay value than adventure games tend to.  If you like comedy science fiction and have even the vaguest leaning towards point and click adventure games, you’re definitely going to enjoy it.  It’s sensibly priced and well worth the money.


This game actually comes packaged as The “AstroLoco Bundle” also comes with two short games created by the same team for Ludlum Dare –subATOMIC and Plan M – but great fun for about half an hour to an hour.  It’s in these games that you can see the unique graphical style and the trademark humour forming that appear in AstroLoco. 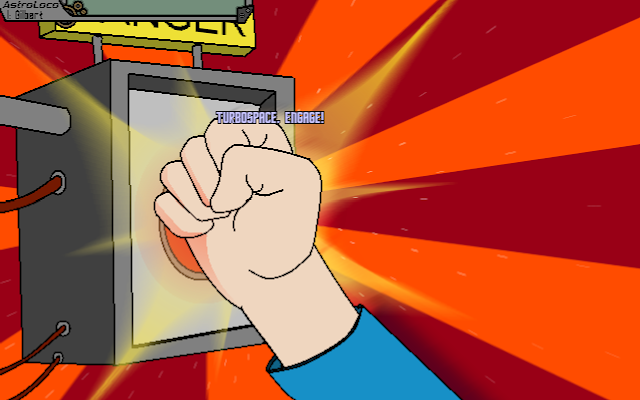 I voiced a couple of the characters in this game and have actually met the developers – in fact I interviewed Murray previously on another blog.  Really nice guys!

In the commentary for the convoy captain, they mention that I did this voice and it amused them to have their arch nemesis (the creator of the Captain Disaster games) voicing a character in their game - it’s a “friendly rivalry” that we have… or so they say?!?

When I met them, they mentioned that having an American voice a character who used British expressions was quite a challenge at times – you can notice this on very rare occasions if you listen carefully.


AstroLoco: Worst Contact is a nominee for Best Writing: Comedy in the 2013 Aggie Awards!